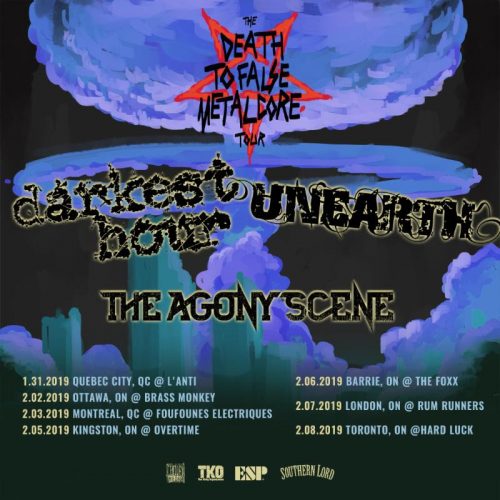 D.C. metallers Darkest Hour have announced the Canadian winter leg of their tour with Unearth and The Agony Scene.

The tour, dubbed the “Death to False Metalcore Tour” will start at the end of January and run through April first. The leg with Unearth and The Agony Scene runs seven shows from January 31 to February 8.

Darkest Hour are touring in support of their album Godless Prophets & The Migrant Flora, released in 2017.

Check out a full list of tour dates here. 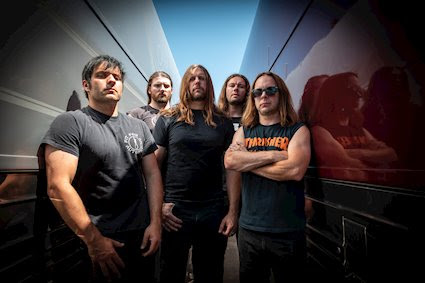 Boston metallers Unearth have embarked on a North American tour in support of their upcoming album Extinction(s).

Extinction(s) is due out on November 23 via Century Media Records.

They will be on the road with Fit For An Autopsy, The Agony Scene and Traitors. 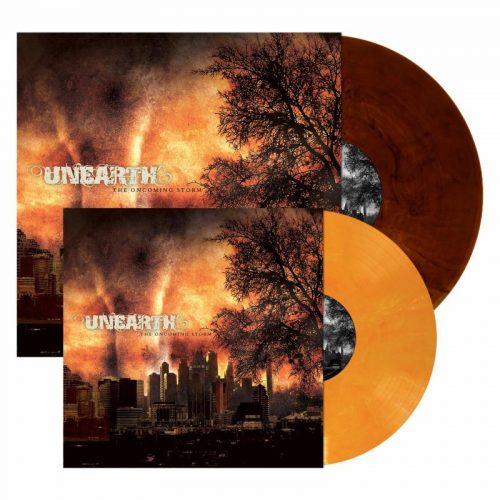 Pre Orders are now available HERE for a re-issue of Unearth‘s breakout album The Oncoming Storm. The record helped make the band one of the guiding lights of Metalcore in the early 00’s and built on the promise of earlier material soundly. Perhaps the band’s most ‘classic’ early release with fans, Unearth really hit an early career stride with this release by slightly refining their twin guitar attack into a more road tested and deadly professional sound. Nonetheless, it still remains heavy as hell and the band have never broken that pact with fans. 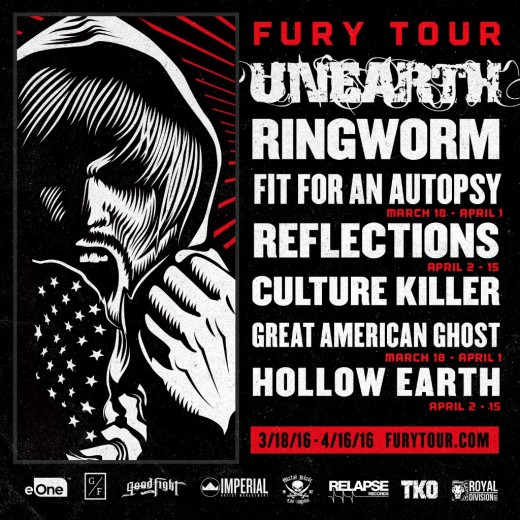 Obviously this is going to crush and does not need much additional discussion other than…RULE! 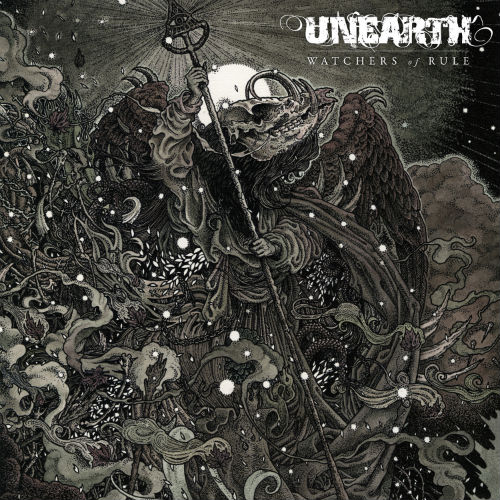 Arch Enemy‘s current victorious live dominance via their new line up will soon get a run for its’ money when American metalcore stalwarts Unearth, one of the most consistent and important heavy bands of the last decade or so, join up with team Alissa in Europe. This is a great package for fans to witness pure skill and reverence for intense metal on stage every night, two bands in it to win it with a long track record of giving their best to the fans. 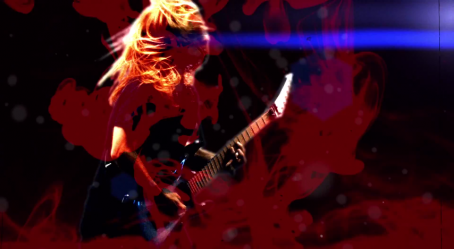 Metallic bruisers Unearth have released a new video for “The Swarm” from Watchers Of Rule via Metal Injection. It features some of the fastest riffing and more insane drumming yet heard from the road warriors and is another in a long line of solid songs cementing them as among the finest bands in metal. Unearth in recent years have really found a great balance between their live attack and superior production. Check “The Swarm” out HERE.

Crowbar, Unearth and Black Crown Initiate? It is so. 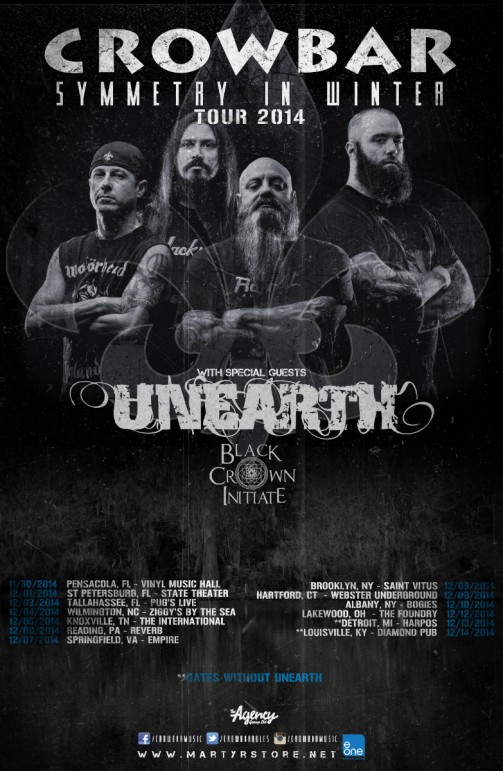 CROWBAR have announced a new batch of tour dates with label-mates UNEARTH and BLACK CROWN INITIATE for December. Dates will kick off in Pensacola, FL at the Vinyl Music Hall and trek through the eastern half of the U.S. before finishing up in Longview, TX. View all dates here. 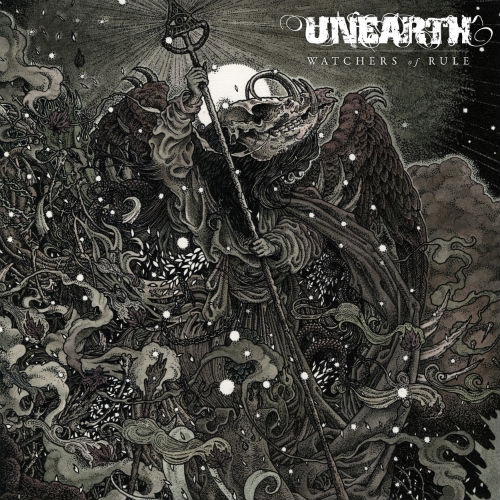 Real gassed up about the new Unearth record Watchers Of Rule. Just been one of my favorite bands and so consistently great for years. But the newest track is really, really good. Just loving the tones and killer, slightly looser feel of the song but such signature Unearth elements as well. Goosebump shit.

Hear the track and order everything HERE. 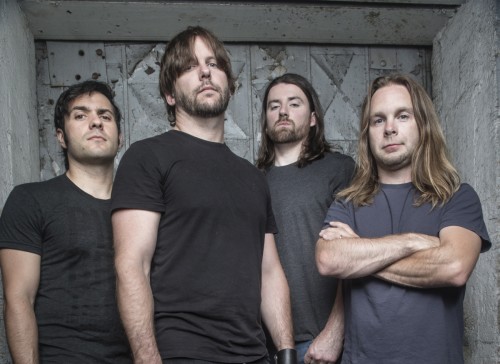 UNEARTH recently wrapped up a highly publicized Oncoming Storm Tour, celebrating the tenth anniversary of the band’s fan favorite LP. The band also took part in the famed HEAVY MONTREAL FESTIVAL where they debuted a track off the new LP called “The Swarm.”

What can I say? There isn’t a single Unearth song I dislike. The new album name sounds like a Testament-type title. Count me in! Widdly chugga roarrghh!!! 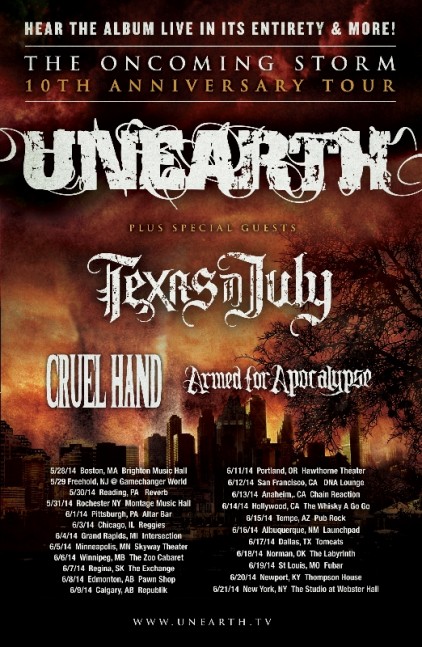 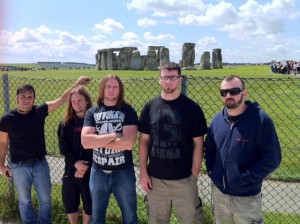 Aaand…We’re back with another edition of Metal Riot’s DEEP CUTS. This is a series where we take three songs that are less known from any given heavy bands albums and shine some light into their eyes. Past cutters include Korn and King Diamond (to name a few).

This time we look at the headbanging bad boys in Unearth. Sure, it isn’t like this take no prisoners New England band has a slew of top 40 hits. We aren’t delving into multi-platinum jukebox kings Journey’s repertoire and dusting off “Suzanne” from Raised on Radio here (damn, that song is catchy though).

Nah, we are showing some love to one of the most consistent and best metalcore bands on the planet. These guys are road dogs and true metal beleivers and that kind of integrity deserves some Metal Riot accolades. Some people think they always sound the same, but the same gets thrown at Slayer. If it aint broke, don’t fix it! Unearth’s sound is exciting, angry and endless.

Click HERE to see what songs made this edition of Deep Cuts. 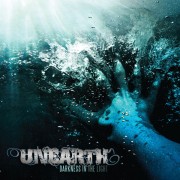 Massachusetts metalcore act, Unearth, have released a lyric video for their song “Arise The War Cry” off their album “Darkness In The Light.” This is the second video that has been made for this album, the first one is a music video for their song “Watch It Burn” (you can see it here). The band has also announced that they will be playing at the New England Metal & Hardcore Festival April 21st, 2012 in Massachusetts.

“Darkness In The Light” was released in July through Metal Blade Records.

Suicide Silence recently confirmed that they will be hitting the road this summer on the 2012 All Stars Tour. Dates are set to be released next month.

Other bands joining Suicide Silence on the road will be Attila, I See Stars, Unearth (select dates), The Word Alive, For The Fallen Dreams, Stick To Your Guns, Stray From The Path, Dance Gavin Dance (select dates), and many more that are yet to be announced.

Massachusetts metalcore group Unearth has just released a video for “Watch it Burn”, the first single from their 2011 Metal Blade Records release Darkness in the Light.

Singer Trevor Phipps had this to say about the video:

“This video captures both the energy we put into every performance as well as imagery of the dark lyrical content of ‘Watch It Burn’. We want to thank Scott Hansen and his crew for their hard work delivering such a sick video for our fans to see.”

Massachusetts metalcore act Unearth has announced a new addition to the band with drummer Nick Pierce. Nick has previously accompanied Unearth on two tour dates in Alaska back in May of 2011. He has also played with the Los Angeles based death metal band The Faceless.