Search Results for "Loyal To The Grave" 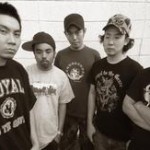 Japanese Metal heads Loyal to the Grave have signed onto Eulogy records, based out of Florida, and have announced that they will be recording a yet untitled album later this year.

Loyal to the Grave will also be touring the United States this winter with After the Burial, Winds of Plague and others as a part of the December Decimation Festival.