Search Results for "I the Breather"

I, the Breather parts ways with drummer

Maryland metalcore band I, the Breather have parted ways with drummer Morgan Wright. Wright was one of the founding members of the band which was formed in 2009. The split seems to have been amicable and a replacement has not yet been announce.

You can read a statement by Morgan here.

I, the Breather has released two full studio albums and an EP all three of which featured Morgan Wright on drums. The band is currently signed to Sumerian Records.

More On: Metalcore, General News, I the Breather, Sumerian Records
Comments (1)   share on:

Baltimore Christian metalcore band I the Breather have released a lyric video for their song “4.12.11” off their 2012 release Truth and Purpose which just hit stores on February 28, 2012 via Sumerian Records.

The video can be viewed here. 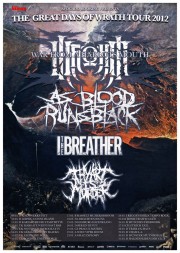 Pennsylvania metalcore act, August Burns Red, have announced they will be doing a headlining United States tour. They will be supported by Silverstein, Texas In July, Letlive (Jan 13-29), and I, The Breather (Jan 31-Mar 3). The tour will last from January 13 through March 3rd as they play in 41 cities. 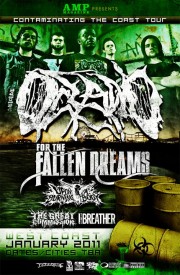 Fresh from their sold out Contagion Across The Nation tour, Chicago deathcore band, Oceano are pleased to announce the Contaminating The Coast tour. Sponsored by AMP magazine and running throughout the month of January.

Trekking along with Oceano will be their friends, For The Fallen Dreams, Upon Burning Body, The Great Commission and I The Breather. The full list of dates for this January tour will be announced soon.

I the Breather announce tour with As Blood Runs Black 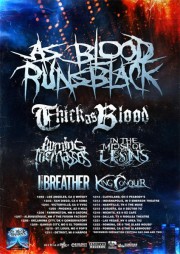 Christian metalcore act I The Breather has just announced a December tour with As Blood Runs Black, Thick As Blood, In The Midst of Lions, and others.  The tour kicks off on 12/2 at the Whisky in Hollywood, California and continues through 12/22 when the tour joins forces with the December Decimation festival in Pomona, California.

I The Breather are about to release their debut album, titled “These Are My Sins.”  The album is set for release in mid December, 2010 through the band’s new label Sumerian Records.