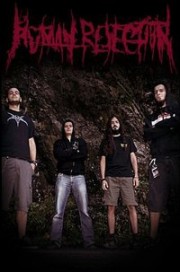 Greek death metal band Human Rejection have posted a promo release of their music video for “The Structure of Mankind.” Click here to watch.

Human Rejection recently inked a digital worldwide deal with UK’s Siege of Amida Records for digital distribution. There has been talk of an upcoming album release this year, though details have yet to be mentioned. Currently, the band has two new songs which are streaming on their MySpace, both of which Human Rejection has noted upcoming video releases for.

Greek death metal band Human Rejection has released information that vocalist Alex has been in a motorcycle accident. He had to have major surgery on his arm, and is now recovering in his home, where he will be for a few months.

Drummer Chris had to join the army in the past week as well. this leaves the band shorthanded two members for the time being, and thus they will not be having any tours or concerts in the near future.