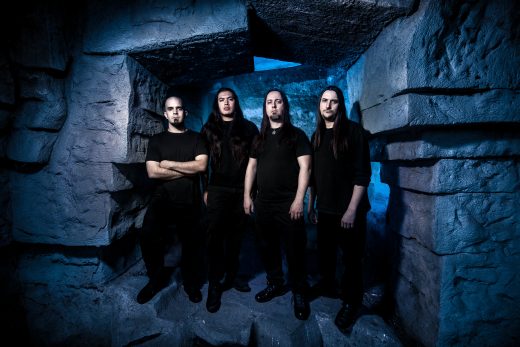 If you are tired of the parade of extremely ugly Republicans on tv and want some cool death metal distraction , we have killer news from L.A. tech death metallic monsters Abysmal Dawn today! Abysmal Dawn remain one of the most intense bands out there and will be embarking on a North American tour as direct support for VADER in February of next year! Their star will surely continue to grow and consume all!

The run will kick off on February 4 in San Diego, CA and will conclude on February 28 in the band’s hometown of Los Angeles. The full run of dates can be found below. For updates on ticket links and on-sale times, follow ABYSMAL DAWN on BandsInTown HERE.

In addition to the tour announcement, ABYSMAL DAWN has even bigger news in store for 2020! The band has just completed work on their long-awaited fifth studio album, which will be their debut to Season of Mist. The forthcoming full-length was mixed by Charles Elliott and produced and recorded by Charles Elliot and Mike Bear at Tastemaker Audio while the drums were tracked by John Haddad at Trench Studios. The offering was mastered by Tony Lindgren at Fascination Street Studios. I for one am incredibly pumped at this news and was hoping the band would land a new, solid contract somewhere soon!

Speaking about the upcoming offering, ABYSMAL DAWN comments:
“We’re officially done with album number 5! It’s been quite some time since we released any new music, and we feel we have something special on our hands. It took a lot of time, effort, and seeing through some trying times to get to this moment. We’re very proud of the outcome and think fans will agree it was worth the wait. Musically we’re pushing our limits more than ever, while still maintaining what people love about Abysmal Dawn. Now we take a quick breath before getting back once again to spreading our brand of misanthropic extreme metal across the globe. See you on the road in 2020!” 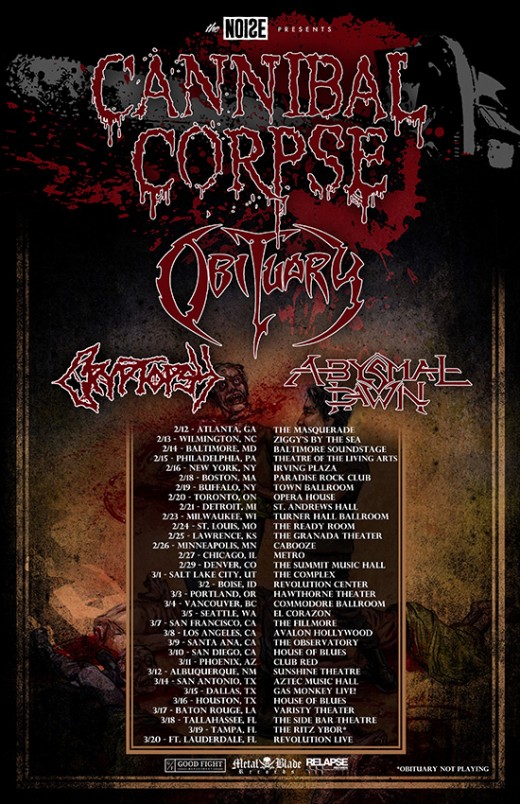 Cannibal Corpse is beginning 2016 with one of the most bludgeoning death metal lineups fans will see all year. Fellow Florida death metal progenitors Obituary will serve as direct support, followed by Canada’s Cryptopsy, and Abysmal Dawn from Los Angeles. The tour, presented by The Noise, will tear across North America beginning on February 12th. The tour runs through March 20th. The dates and cities are listed below. Tickets go on sale this Friday, December 11th, at 10:00am local time through all local and national ticket outlets. 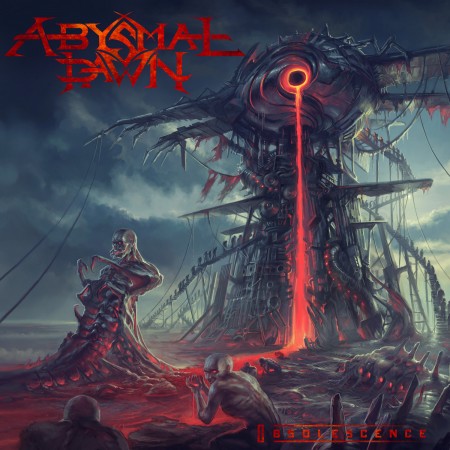 Tech death gurglers Abysmal Dawn are back with “Inanimate”, a taste of what is to come from new album Obsolescence.  If this doesn’t give you whiplash, you are pretty jaded.

Obsolescence is available for pre-order  HERE and digitally via Bandcamp HERE. The album will be released on CD/LP/Digital/Deluxe Digital formats. The CD and digital releases include a bonus cover of Dissection’s “Night’s Blood” and the digital deluxe version includes demo recordings of every song on the album. A Relapse.com exclusive vinyl color is also available and includes a full color album cover poster. The devastating, otherworldly artwork was created by Pär Oloffson (The Faceless, Spawn of Possession).

The band are also hosting a cool free listening party hosted by MMA fighter Josh Barnett. Check it out HERE.

Los Angeles death metallers Abysmal Dawn have entered the studio to record the follow up to their 2011 release Leveling The Plane of Existence.

Check out comments from frontman Charles Elliot and the video for the song “In Service of Time” off of Leveling The Plane of Existence here. 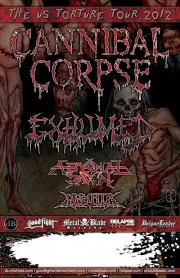 Floridan death metallers, Cannibal Corpse, have announced they are headlining a United States tour. The tour will last from April 5th and last through May 3rd. The band will be supported by Exhumed, Abysmal Dawn, and Arkaik. The tour will make stops in twenty-five different cities as bassist Alex Webster has commented:

“We’re psyched to hit the road with Exhumed, Abysmal Dawn, and Arkaik in April! This is a full-on death metal tour that we know all of our fans will love. Prepare for an evening of relentless aural punishment!”

Los Angeles based death metal band Abysmal Dawn has been busy remastering their debut album “From Ashes” due out 1/17 via Relapse Records. The long out of print, newly remastered version will also feature 3 bonus tracks. The “From Ashes” reissue  is available for pre-order via Relapse here. To celebrate, Abysmal Dawn has released the remastered track “Salting The Earth” via Noisecreep which you can listen to here.

The LA death metal trio has also debuted a new video for the song “My Own Savior” off the “Leveling The Plane Of Existence” album. The video was created by Rob Mestas as part of a fan contest with Metal Injection. “My Own Savior” can be seen here.

Abysmal Dawn release music video for their song “My Own Savior” 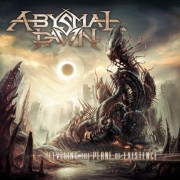 California death metallers, Abysmal Dawn, have released a music video for their song “My Own Savior,” off their newest release “Leveling The Plain Of Existence.” The video was created by Rob Mensas as part of a fan video contest with the site.

The band’s newest album, “Leveling The Plain Of Existence,” was released in February 2011 through Relapse Records.

California death metallers, Abysmal Dawn, have announced that they will be doing a North American tour with support from Obscura, Last Chance To Reason (Nov.4-25), and Enfold Darkness(Nov.28-Dec.7). The tour will last from November 4th through December 7th. To see the full tour schedule click here.

Abysmal Dawn has also announced that they will be releasing a reissue of their 2006 debut album “From Ashes.” The album will be released January 17th through Relapse Records.

Tragedy struck Japan two months ago, and the worlds of MMA and heavy metal are joining forces to raise some money for the grief-stricken nation. MMA fighter Josh Barnett has organized a benefit concert for the Land of the Rising Sun and has booked some impressive bands to draw the biggest crowd possible. The show is at the House of Blues on May 26th and tickets can be purchased here. Confirmed acts for the show thus far include:

and Thrown Into Exile

Barnett had this to say about the show:

“In any form that we can generate funds, support and just simply the Bushido spirit to all those affected by this we will be successful and keep the sun forever rising in Japan.”

All Shall Perish added:

“We would like to personally thank Josh Barnett for inviting us to play this very special Japanese relief benefit show. What happened over there was a travesty and while it’s easy to not think about the events that took place because we are so far away, we hope to remind people how much help is still needed.”

New Song: “In Service of Time” off upcoming album “Leveling the Plane of Existence”

Los Angeles Death Metal band Abysmal Dawn released a new song “In Service of Time” off their upcoming album “Leveling the Plane of Existence”. The song is streaming on the bands Facebook and Myspace Page. The Album is due to be released February 1st, 2010 through Relapse Records.

To here the song visit the myspace page here.

Absymal Dawn, a Californian death metal band, have released footage of them working on their new album, “Leveling the Plane of Existence.” The album is set for a February 1st, 2011 release and is the followup to their 2008 “Programmed to Consume” album which was released on Relapse Records.