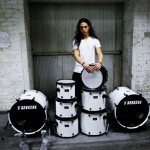 The following statement comes from the band Forbidden regarding their vacant drummer position:

“After a couple of grueling months of sifting through video auditions, we’ve finally got our man. Let it be known that on Halloween 2011, Sasha Horn from Chicago is Forbidden’s new drummer!

“Sasha, however, lifted us to another level. When he started playing ‘Infinite,’ everyone in the band immediately looked at each other and our eyes got bigger. It was something that Russ and I have not felt since Paul Bostaph first played with us back in 1986, when we were kids. Simply put, great chemistry! A sense of invincibility was in the room. Then we played ‘Forsaken At The Gates’ and it was over. No need to keep playing – we were stunned. In fact, some of our hands were shaking! That’s saying something. It was like gasoline thrown on an inferno!”

“This was an amazing opportunity from the get-go, to be able to throw my name in on auditions for a band that I’ve been an avid fan of since I was 12 years-old. How does it feel to now get the chance to slay alongside them? Otherworldly. Truly out of this world. To just be considered along with the other amazing drummers from across the globe was a humbling experience in itself. And it’s because Forbidden is a band that wants to constantly take leaps and bounds up to that next level that I know this is the perfect union. When we got into that room and played together for the first time, the chemistry just went right off of the charts. That’s a good feeling to start off with.”

California thrashers Forbidden were forced to cancel their European tour due to family obligations on the part of  their drummer. Forbidden’s guitarist Craig Locicer states,

“Due to family obligations on the part of our longtime drummer, Mark Hernandez, Forbidden is forced to cancel it’s tour of Europe and will start to search for an adequate permanent replacement right away. Compounding things is the fact that Mark and I also play in Demonica, who were to open the tour. Unfortunately, at this late date, there is no time nor budget to find a replacement who can handle both bands and our only option right now is to cancel the entire tour. Forbidden would like to apologize to all of the different promoters, Continental Concerts, the bands Communic and Demonica, our label Nuclear Blast, and most importantly our fans who have been waiting for us to finally make it overseas for our first proper European tour in support of Omega Wave. You all deserve better. This is a collective kick to everyone’s stomach and it is very difficult for us to swallow.”

Locicer has also announced they will reschedule the tour dates that they cancelled.

Nuclear Blast band Forbidden has a new video prepped and primed for your viewing pleasure. “Omega Wave” was created by SchneppZone video director Jon Schnepp of Metalocalypse fame and it’s the title track off of their most recent album Omega Wave.

Guitarist, songwriter, and founding member Craig Locicero offers the following commentary about working with such a creative mastermind:

“Forbidden never got to make a proper video in the past. Sure, we’d made a couple below average ones over our first 10 years of our history, but never anything we were very proud of. When we finally recorded Omega Wave after a 14 year break between records, we knew it HAD to be something special.