Gallhammer launch mini-site for “The End” 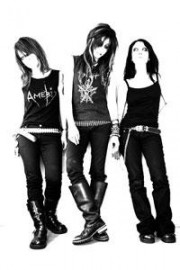 “The End” was released on April 25th.

Metalheads across the globe released a collective sigh of love sick despair when Japanese Black Metal femme fatal, Vivian Slaughter, married Maniac (Skitliv, Ex-Mayhem) at the beginning of this year.

But good news is just around the corner. Slaughter and her fellow band members in Gallhammer have announced that their third studio album “The End” will be released on April 25 via Peaceville Records. Supposedly the album, which follows critically aclaimed “Ill Innocence” and “Gloomy Lights” will feature “strange & psychedelic experimental sounds of doom.”

Get the skinny here!