Scottish death metal band Cerebral Bore have apparently lost their frontwoman Simone “Som” Pluijmers.  According to the band, she walked out on them less than 24 hours before their US tour.

Luckily, Cerebral Bore was able to tap friend Shawn Whitaker to handle the vocal responsibilities so they did not have to cancel any dates.  The band’s latest release was 2011’s Maniacal Miscreation under Earache records.

Masters of death metal Cerebral Bore has confirmed a U.S. tour with support from Dying Fetus, Cattle Decapitation, and Malignancy. The tour is set to kick off November 24th in Atlanta, Georgia and will end on December 23rd in Trenton, New Jersey.

To see comments, tour dates, and a video from the band click here.

Scottish death metallers Cerebral Bore have confirmed dates for an Eastern European tour, which kicks off on September 5th in Szeged, Hungary.

Here’s what guitarist Paul Mcguire of Cerebral Bore had to say about the shows:

“Time to score another seven new countries off the list on this one, and great to do it with two bands who we are already close friends with. We will be starting this tour less than a week after Summer Slaughter, so we should be on top form as far as our playing is concerned, which is always a good thing when playing to new audiences. A stop at Bathory castle is also in order!”

Scottish death metal group Cerebral Bore will be headlining the Extreme Gorefest in Venezuela this summer.

“The Extreme Gorefest show in Venezuela will be our first experience of the South American underground scene, which is notoriously reputed as being one of the most dedicated and frankly mental in the world. Being asked to headline is also a great honour for us, and we fully intend to make a serious impact with this opportunity before returning at some point in the not-too-distant future for a full South American tour.”

Scottish death metal band Cerebral Bore have premiered a brand new video for the song Horrendous Acts of Inequity. The song was produced by Chris Fielding and recorded at Foel Studio in Wales. The guitarist for the band, Paul McGuire, goes on to say that this song will be a taste of things to come for future albums.

To see the video, read more of what Paul McGuire had to say and a list of upcoming tour dates click here.

With a number of US tours already under their belt, Cerebral Bore will be crossing the atlantic once again next month, kicking off the trek on February 19th in Houston, Texas. The tour will also include the band’s first ever performances in Canada.

“I’m chuffed to be going back to the states so soon! Last summer was great, but to go back on tour with the likes of Hate Eternal is a big milestone for us as a band. I booked our previous US tours on my own, and they were a success, but to go on a US tour that I had no part in booking is a new experience for me. I also can’t believe that we will be playing at the Whiskey A Go Go in Hollywood; I actually went out of my way just to get a photo outside that venue when we were there last year. And on top of this, we get to tour in Canada for the first time! We have always wanted to play Canada, and to play there for the first time opening for Hate Eternal is maximum beastage!” 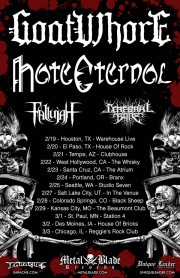 Louisianan black metal act, Goatwhore, and Floridan death metallers, Hate Eternal have announced a co-headlining United States tour. The tour will last from February 19th through March 3rd as they play in thirteen different cities. The bands will also be supported by Fallujah and Cerebral Bore.

Hate Eternal’s latest album “Phoenix Amongst The Ashes,” was released in May 2010 through Metal Blade Records.

Scottish death metalers Cerebral Bore have been confirmed for next year’s Hammerfest at Pontins in Prestatyn, UK, which takes place from March 15th – 18th, 2012.

Cerebral Bore are among the latest groups to be confirmed for the festival, joining the likes of Anthrax, Skindred, Exodus, Amon Amarth, Lawnmower Deth and more. The band will be performing on Saturday, March 17th at 14:00 on the Second Stage.

“Finally we get to cross it off the list… To play at a Pontins holiday park! Supporting Anthrax is also a bonus, but it comes second… Not even a close second to the Pontins-induced excitement we are all feeling right now!”

Scottish death metallers Cerebral Bore, who recently wrapped up a mini-UK tour with Severe Torture, are gearing up for this weekend’s Damnation Festival at Leeds University Union in the UK.

The band is due to perform at 2:00pm on the Terrorizer Stage at the all-metal festival this Saturday, November 5th, joining a line-up of bands including Devin Townsend Project, Godflesh, Decapitated, Evile and more.

“The Damnation line-up looks great, and it gives us a chance to play with some bands we wouldn’t typically be paired with. Not much drinking time before 2pm, but hopefully everyone will be in the mood for some circle pits and what not!”

Damnation Festival hits the UK on November 5th and the latest band to be confirmed on the bill are Cerebral Bore.

The Scottish death metal band will be performing alongside The Devin Townsend Project, Decapitated, Godflesh, Evile and more.

“We are really glad to have been added to this year’s Damnation bill, and really glad to be playing another high-profile, great UK fest after the success of our recent Bloodstock appearance,” says guitarist Paul McGuire.

“It is a pretty diverse line-up, but we love the challenge of playing to a crowd of non-strict brutal death metal fans once in a while – it keeps us on our toes and at the same time gives us a chance to massacre some unsuspecting gig-goers and possibly act as an entry for them to discover the genre and the vast underground scene that we have been raised on.” He adds.

Two members of Scottish death metal act Cerebral Bore were recently arrested in New York City in what was a case of mistaken identity and being at the wrong place at the wrong time. Guitarist Paul Mcguire and bassist Kyle Rutherford have recapped their New York experience.

“Our latest trip to the US was possibly the most fun we’ve ever had on tour! The shows were great and the hospitality shown throughout the tour was second to none! Besides the problems that occurred in New York at the end, the tour went without incident and was smooth as could be! Fresh off the plane from Cancun, still celebrating three blinding shows in Mexico, we were hours away from boarding the plane home when we had our run-in with the NYPD in Brooklyn on the last morning. It was a hell of an ordeal, but it has only made me more eager to get Cerebral Bore back to the US, considering how long we went thinking that we may never get to tour the US again! But we are home now and gearing up for the second part of the year, and getting ready for our upcoming appearance at Bloodstock, as well as the trips to India and Ukraine, and a solid batch of work on album number two!”
Click here to read the story on what happened.

The band’s debut album “Maniacal Miscreation” is out now via Earache Records.

Scottish death metal act Cerebral Bore have officially been added to the 2011 edition of “Bloodstock” in the UK. The festival is set to take place August 12-14th at Catton Hall in Derbyshire.

Cerebral Bore guitarist Paul McGuire has this to say, “BLOODSTOCK! Fuck yes! I’ve heard so much about this festival, and in all honesty I never thought we’d end up on the bill. Really looking forward to sharing the bill with Lemmy’s wart, Morbid Angel, At the Gates and Napalm Death – it’s gonna be a great way to welcome us back to the UK after our US tour and, after a bunch of festivals across Europe, it will be awesome to finally play one on home soil. As one of the most brutal bands on the bill, you can expect that we’ll go all out for you, a full-on fucking annihilating performance. Come and see us on the Sophie Lancaster stage, or don’t and regret it forever.”

Leading up to the festival, the band will be embarking on a summer tour of the UK, the United States, and Mexico. Click here to check out the full tour dates!

The band’s debut album “Maniacal Miscreation” is out now via Earache Records.

Scottish death metal act Cerebral Bore, have released a new music video for the track “Maniacal Miscreation”, the title track from the band’s debut album which is out on Earache Records.

The video for “Maniacal Miscreation” was filmed with director Phil Berridge who was also responsible for the band’s first video, “The Bald Cadaver.”

Cerebral Bore dummer, Allan McDibit, had the following to say about the process of shooting the video: “It was cold, a bitch to shoot. But it was fucking awesome!”