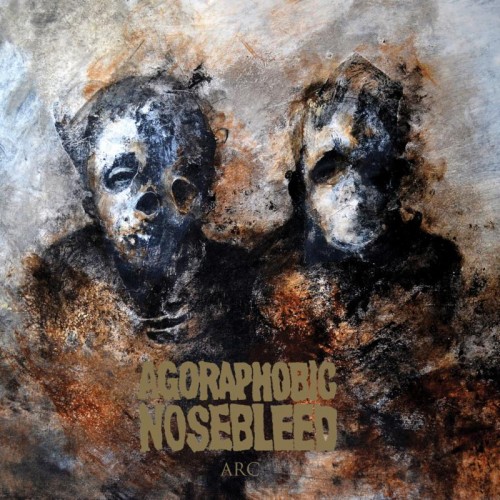 Agoraphobic Nosebleed somehow went from being an insider’s dream concept to a full fledged legacy band (in certain circles). The closest thing we still have left to anything as vitriol fueled as Brutal Truth, yet with the industrialized power/edge of Pig Destroyer/and the relevance of Drugs of Faith to boot.

The ARC EP finds the band in top form, a sleaz-i-fied riff fest two minutes into “Not A Daughter” the first and foremost real display of a burlier and at times pretty much southern rock sound for the band. You read that right. There are some real barn burner’s thrown in amidst the slog.

The EP- harsh vocals from Kat on full blast – is a true headbanger’s oasis of skull crunching pit worthy riffs that can appeal to fans of stoner, grind, fringe hardcore and even slow death metal at times. It is awesome the band continue to fearlessly evolve, just as Black Flag once did, for example. That’s one surefire way to stay relevant, unless you make a Cold Lake (which I secretly like).

Even the record art is more of a fine art mutation than some of the shockier stuff at bedbathsaltsandbeyond.spreadshirt.com.

“Not A Daughter” ends with a horn thrower of a riff worthy of Alabama Thunderpussy’s much missed Staring At The Divine-era, albeit a lot more evil. It’ll remind you Richard lives in Virginia (I think he still does, at least).

Anyway, this is the sickest fuckin’ band and you know it (or oughta). They make me want to barf out of my eyes. It’s pure bottled charge and pay off after payoff. “Deathbed” is a grungier dirge than the majority of recent melvins and us ugly as the S/T Eyehategod stuff, complete with low male death vocals and synthetic drum poundage. “Gnaw” has some stuff so knuckle dragging in it that it almost sounds like Xibalba was an industrial crust band. Fuck yeah!!!

I wish this record was more than three gloriously hellbent songs and was at least six. It’s a monster anyway and nonetheless will exhaust you with awesome adrenaline rush wall of metal power. But in a flaming heap afterwards you nonetheless want more material, a liberal bloodlusting for good art that will thaw any frozen corpse’s heart in a guitarbang of volume, aesthetic and road.

I remember discovering Agoraphobic Nosebleed‘s Frozen Corpse Stuffed With Dope with my drummer friend Zac Shaw with a sense of stoned glee and an atom level knowledge that somehow life would never be the same. It was one of my earliest introductions to that level of musical insanity. I grew up on Big Black and Jesus Lizard records but Agoraphobic was another level of “that is intense” all together. For people who love to find bands that make other people say “What the fuck are you listening too?” and run in horror, this is a great place to start.

Since the band got Katherine Katz (ex-Salome), they have gotten somehow even more rad. The Richard Johnson and Scott Hull tag team of madness finds a perfect foil in Katherine’s insane screams. New record ARC thankfully drops almost a year to the day that my father died and I am thanking the grind gods for giving me something really distracting I am bound to enjoy musically during what is surely going to be a week of seriously bad mood swings for me.

It looks like this 3 song EP will focus on the slower side of the band, as it is not that many tracks but clocks in at about twenty plus minutes. Color me stoked as fuck, since sister band Pig Destroyer’s recent Mass & Volume EP was a beast.

New Video: Agoraphobic Nosebleed – “Miscommunication” off upcoming “And On And On…”

Massachusetts grindcore band Agoraphobic Nosebleed has posted the video for “Miscommunication” online now at MetalInjection.net. The video was edited by David Hall for Handshake Inc. (Maryland Deathfest: The Movie, Disgorge, Mexico). “Miscommunication” comes from the band’s upcoming split release with Despise You. The split, titled “And On And On…”, will see its release tomorrow, Tuesday, April 26th, via Relapse Records. Click here to watch the video.

“And On And On…’ features the first new recorded Despise You material in almost 10 years, with 18 tracks clocking in at just under 17 minutes. The Agoraphobic Nosebleed side of the split features seven brand new tracks of the band’s always-evolving-grindcore. The split is currently streaming in its entirety online now at Crustcake.com, just click here to listen.