Los Angeles heavy metallers White Wizzard are now streaming The Devils Cut in full online in anticipation of its release in North America on June 25 via Earache/Century Media Records.

Head over to RockHard.de to check it out.

The Devils Cut was released on June 3 in Europe.

Will Wallner – Lead and Rhythm guitar 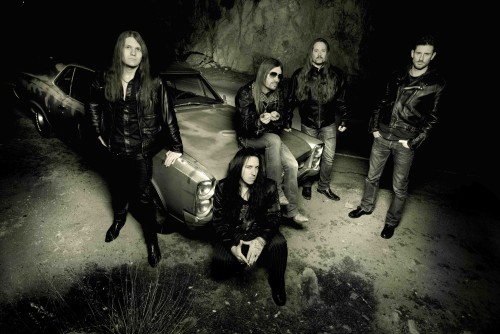 White Wizzard is a New Wave of Traditional Heavy Metal band hailing from Los Angeles California. Founded by bassist Jon Leon in 2007, the band has suffered some line up issues, but is now getting ready to unleash a new album, The Devil’s Cut (Earache/Century Media) with a great new line-up.

I caught up with Jon Leon and singer Joseph Michael a couple of days ago to talk band name inspiration, the state of the industry and the future of White Wizzard.

Check it out here!

California Metallers White Wizzard are streaming “Strike the Iron” off of their forthcoming album The Devils Cut, which is expected to drop on June 3 in Europe and on June 25 in North America  via Earache/Century Media Records.

White Wizzard bassist Jon Leon had this to say about “Strike the Iron”:

“‘Strike the Iron’ is my favorite WHITE WIZZARD song I have ever written, along with ‘The Sun Also Rises’, which closes the new record.  I am very proud of the arrangement.  I had the verse melody in my head and chorus line before I even picked up the guitar and started writing it.  It has stunning leads by Jake and Will, and Joseph interpreted the vocal melody fantastically and gave so much character to it.  This song really exemplifies everything this line-up is capable of and everyone’s talents really came through on it.  It never lets up and we are very excited to get this one out there live…I expect it to be our opening song for the next couple of years.”

Check out the previously released “Kings of the Highway” as well as The Devils Cut tracklisting here.

Los Angeles modern-day heavy metal act White Wizzard are due to kick off a European tour with Iced Earth this Sunday, October 30th.

White Wizzard recently wrapped up a North American trek with Firewind, Arsis and Nightrage at the world-famous Whisky A Go Go in Hollywood, leaving the band just two days before the start of the European tour in Bochum, Germany on Sunday.

California heavy metallers, White Wizzard, have released a new track “Fight To The Death,” from their upcoming album “Flying Tigers.” To give it a listen click here.

The new album has already been released in Europe and is scheduled to be released November 15th in North America through Earache Records.

Californian heavy metal band White Wizzard are streaming the first track from their upcoming album “Flying Tigers.”  It’s called “Starchild” and you can give it a listen right here.

“Flying Tigers,” is slated for a September 19 release on Earache Records.

White Wizzard will head out on tour on September 11 with touring vocalist Michael Gremio and will cover the UK, Europe, Canada and North America. Check out the dates and locations here.

“Flying Tigers”features twelve new tracks and expands on the band’s traditional heavy metal blueprint, with songs ranging from fist-pumping new wave of British heavy metal-style anthems, through the arena rock power of “Starchild”, to a six-track epic concept piece featuring science-fiction and philosophical elements tied together with a progressive vibe.

“Flying Tigers”features the core White Wizzard line-up of bassist, songwriter and founding member Jon Leon, drummer Giovanni Durst and studio vocalist Wyatt Anderson, who featured on the band’s debut album, “Over the Top.” The album was once again recorded with producer Ralph Patlan in Phoenix, Arizona.

“Flying Tigers” is due out September 19th on Earache Records.

Click here for a full track listing and cover art. 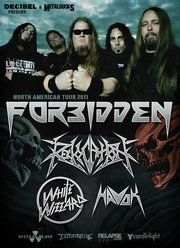 LA’s traditional heavy metallers White Wizzard are kicking off a North American tour this month. Forbidden headlines with Revocation and Havok in support. white Wizzard is out in support of their debut album from Earache, “Over The Top.”