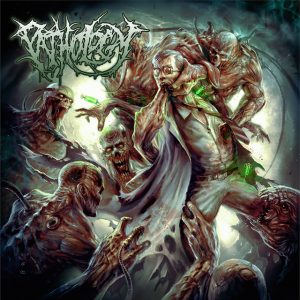 California death metallers, Pathology, have recently revealed both the title and artwork for their upcoming album.

The band’s third Victory Records release is titled The Time Of Great Purification and will also feature artwork by Par Olofsson, creator of the cover art for their last two albums, Legacy Of The Ancients (7/06/10) and Awaken To The Suffering (9/13/11).

Drummer David Astor commented: “This is definitely our heaviest and most technical album to date”

The Time Of Great Purification will be out September 25, 2012 via Victory Records.

California death metallers, Pathology, have announced they will be doing a west coast tour in North America. The band will be rejoined by singer Jonathan Huber. The tour will last from January 13th through February 4th but the band has announced that more dates will be added soon.

The band’s latest album, “Awaken To The Suffering,” was released in September 2011 though Victory Records.

California death metallers, Pathology, have released a music video for their song “Media Consumption,” off their new album “Awaken To The Suffering.” Click here to check out the video.

The album was released September 13th through Victory Records.

California death metallers, Pathology, have released a video teaser for their song “Media Consumption,” off their upcoming album “Awaken To The Suffering.” The new album will be released September 13th through Victory Records.

“We picked ‘Media Consumption’ because that song is a true Pathology track and also because it adds some new elements,” states drummer Dave Astor.  “We thought it would a good one to show everyone the direction of the new album. The song and the album are by far our best and heaviest material to date. We’re very proud of it and hope you like it.”

Listen to the new track here.