California death metal Suffokate have announced that vocalist Ricky Hoover is no longer a part of the band.

Hoover has released an official statement on the situation that you can read right here.

Ricky’s last album with Suffokate was Return To Despair from September 2011 via Mediaskare Records. 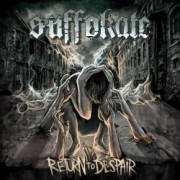 California death metallers, Suffokate, have released a new song entitled “My Darkened Eyes” off their upcoming album “Return To Despair.” To check out the track click here.

The new album will be released September 27th through Mediaskare.