Search Results for "Rise To Remain"

Up-and-coming British metalcore act Rise To Remain have put the song “Heartless” up online for free download.  The song is taken from their upcoming Century Media release City of Vultures which is due out June 5, 2012.  “Heartless” is actually one of four bonus songs included with the U.S. version of the record.  The song is described as “a visceral, brutal statement of renewed intent that scorches its way firmly into your head, heart and soul.”

Rise To Remain is fronted by none other than the iconic Iron Maiden frontman Bruce Dickinson’s son Austin Dickinson.  Man has he got some big shoes to fill.  Although, it must be awesome to know that in one way or another you came from the loins of the great Bruce Dickinson.

British metalcore act, Rise To Remain, have released a music video for their song “Talking In Whispers” off their album “City Of Vultures.” The music video was shot in London. The band has also announced that they will be playing Warped Tour and the tour will last from June 16th through August 5th.

The American version of “City Of Vultures” will be released June 5th through Century Media. 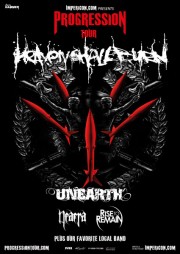 German melodic death metallers, Heaven Shall Burn, have announced a European tour entitled the “Progression Tour.” The tour will last from March 20th through March 31st and will visit six different countries. The band will be supported by Unearth, Rise To Remain, Neaera, and a local band from the area.

Heaven Shall Burn’s latest album, “Invictus (Iconoclast III),” was released in May 2010 through Century Media. 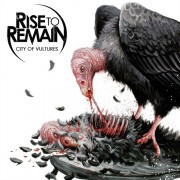 British metalcore act, Rise To Remain, have announced that their  debut album “City Of Vultures,” will no longer be released October 11th. Instead the new album will be released January 24th, 2012 through Century Media. Frontman Austin Dickinson released this statement about the album:

“Hey guys! Just checking in to update you all on some recent developments that will be taking place with us and all our friends in the US of A. As you know, we’ve signed to the awesome Century Media Records, who will be putting out our album, City Of Vultures, for all you guys to hear. We can’t wait to share it with you! We’re so excited to finally have it out. I do have some other news however regarding the release date. Unfortunately, the release date of the album has been moved to January. We’re sorry for all the anticipation which has now been lengthened, but we promise that it will be worth the wait. Huge things are in the pipeline for us and you guys, we will be over soon, and the album will be out! Thank you so much for all your support, time and patience, and we can’t wait to come hang out with you all. Peace, love and thanks again.“