Search Results for "The Cult" 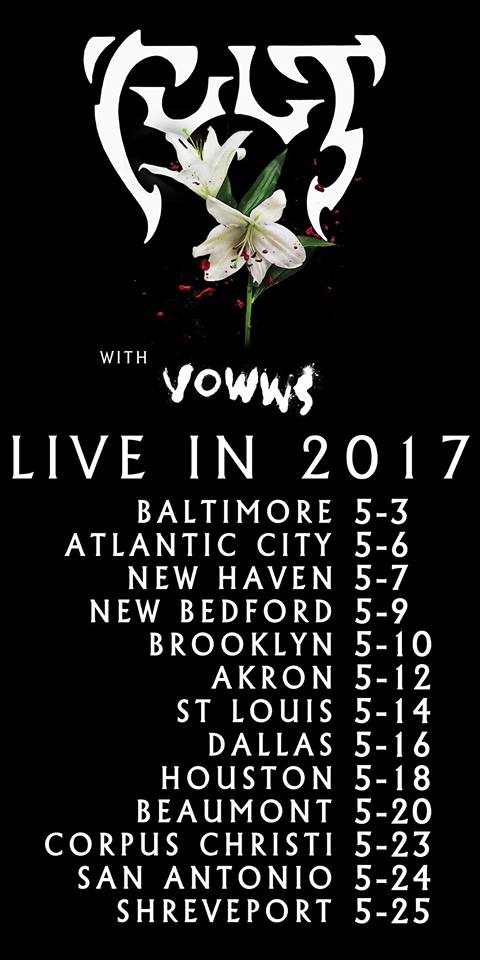 In very exciting news, hard rock dancing dervishes The Cult will be hitting the road with perhaps my favorite group of the moment VOWWS. This is an inspired pairing for a quick US run and our readers who can stand some melody but still want their music with some mystique are encouraged to catch this as these shows will be lit. I mean what I am trying to say is, smoke she is a rising / Fire, yeah smoke on the horizon.
VOWWS: JOINING ++ CULT LIVE 2017 ++ for US dates
TICKETS: http://www.bandsintown.com/TheCult
Add to My Radar

The Cult have premiered a music video for a “Salem remix” version of their song “Elemental Light”, which can be checked out here. Frontman Ian Astbury on the video:

“The sentiment of this film captures the loss of wilderness, and a generation trying to make sense of the trash heap they have inherited. It evokes nature versus man, that struggle [and] desire to control nature and ultimately death.”

The studio version of “Elemental Light” can be found on their latest album Choice of Weapon, which was released last May.

The Cult to “prequel” album next month

The Cult have announced that they are going to release a “prequel” to accompany their last record, Choice of Weapon. The album will contain material that hasn’t been previously released, and will be available exclusively on iTunes for two months only beginning October 16th. You can find the track listing here.

“These songs were turned over and over, forged in long rehearsals and writing sessions, and emanated from challenges both personal and professional.”

Choice of Weapon was released last May.

Music Video: The Cult – “Honey from a Knife”

The Cult have premiered a music video for their song “Honey from a Knife”, taken from their latest album Choice of Weapon, which came out last May.

The song title and video are based on the Buddhist precept from The Sutra of Forty Two Chapters, which reads, “Wealth and beauty, to a man who will not relinquish them, are like a knife covered with honey which, even before he has had the pleasure of eating the honey, cuts the tongue of the child that licks it.”

Go here to watch the video. It was shot in Washington Heights, a neighborhood in New York City, on a RED Scarlet Camera by Rick Rodgers.

In a recent interview with ViperRoom.com, The Cult bassist Chris Wyse revealed that the band is almost finished recording their anticipated new studio album, which is supposedly due for release in April of next year. He explained, “The new The Cult deal is with [the] Cooking Vinyl [label]. We’re in good company with The Prodigy and Marilyn Manson. The record is nearly done; Ian [Astbury] is probably doing vocals right now. It is due out April 2012!! This record is kind of a Zep/Stooges mix of energy, and I believe showcases a new level of depth for The Cult.”

The new album is being produced by Chris Goss, frontman of Masters of Reality and also best known for producing albums by bands like Queens of the Stone Age and Kyuss. Other than a series of new songs, The Cult haven’t released a full-length album since 2007’s Born Into This.

The band will embark on a UK tour in January.

British hard rock legends The Cult have announced plans to embark on a UK tour in January of next year. They will be playing ten dates on the trip, which kicks off in Leeds on January 18 and closes on the 30th in Manchester. You can find all the dates here.

The Cult are currently working on a new album to be released sometime next year. Their last full-length studio album, Born Into This, was released back in 2007.