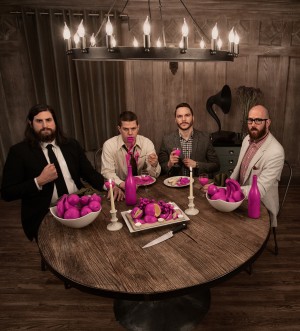 Detroit’s Old Gods have returned with one of the rawest full lengths of the year, the satirical scene shaker Stylized Violence. Do neon color punk shirts and shitty bangs make you want to puke blood? Me too! If you crave something really ripping that can still take the piss out of itself and you might find yourself enjoying a song called “Slaughtered Vomit Doll” or that references “Gravity’s Rainbow” (not the Pat Benatar album), then Old Gods are for you.

I talked to ex-Dillinger Escape Plan guitarist and Old Gods vocalist Jeff Tuttle about why the Black Flag reunion is pretty flaccid, why Ronnie Radke is a douche, horror fascination in society and the irony of trying to sound great screaming.

Jeff Tuttle of The Dillinger Escape Plan recently kicked off another manic musical project, Old Gods. The DEP co-guitarist and a few good friends from Detroit (Randall Kupfer, Derek Swanson and Tony Wolski) have released a zinger of an EP that slips you a mickey and will have you waking up somewhere strange feeling like “Loose Nut” Black Flag meets The Outer Limits.

This is good, spastic, antagonizing and dirty shit. Explosive, mostly short songs with lots of groove even though the riffs are jagged. The band just seems really locked in. Strychnine poisoning, duct tape and snuff reels. Yeah, let’s go!!!

To read an interview with Jeff about Old Gods formation and plans click HERE.