New Video: Ice Nine Kills – “The People Under The Stairs” off “Safe Is Just A Shadow” 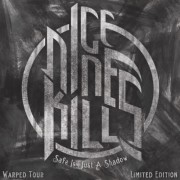 Boston based metalcore band Ice Nine Kills take their name from the ultimate weapon of mass destruction in the Kurt Vonnegut novel, “Cats Cradle.” Their new music video which was premiered today for the song “The People Under the Stairs” is inspired by another piece of art, Quentin Tarantino’s 2009 film, “Inglourious Basterds.” The song is off Ice Nine Kill’s “Safe Is Just A Shadow”, which debuted last year via Red Blue Records. You can check out the video exclusively at Revolvermag.com here.