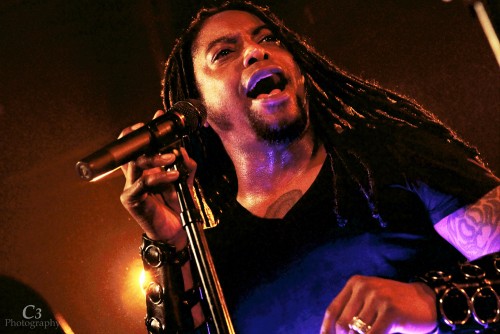 Some bands go acoustic and make a hot mess of it, but not Sevendust. The melodic and syncopated groove metal road warriors killed it on 2014’s crowd sourced win win win Time Travelers & Bonfires.  Live the retooled classic material like “Black” and “Crucified” and great new cuts like “Come Down” or “The Wait” are singalong ritual release. Dudes prove yet again you can never count them out and they can’t be pigeonholed. I feel bad for anyone who has missed out on so many great moments in the 7D timeline for fear of liking a “Nu Metal” associated act.

Catharina Christiana shot the band at Upstate Concert Hall on a recent tour stop for us and you can check the warm and energized photos out HERE. 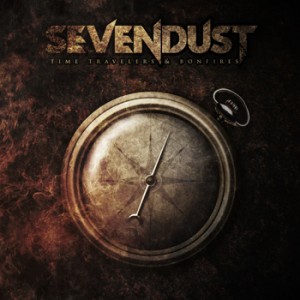 Sevendust have released Time Travelers and Bonfires, an acoustic album that is emotional, powerful and a testament to the skill and feeling that lies beneath the heavy grooves of their music. They are one of the bands like deftones who I feel had a lot more to offer than just being lumped in with nu metal. These guys are simply great songwriters and friends, serious road dogs the likes of which most bands never come close to matching, plus Lajon Witherspoon is a natural vocal talent. Lajon’s voice can be bold and catchy while still feeling human, an all too forgotten facet of what makes music translate beyond shitty pop songs with no life. Sevendust are all about life, in their music and on the stage.

I just saw these guys last night in NYC on the tour for this record, so I am fucking fired up. I am reviewing that show for another publication but I had to throw up an album review for you die-hards today. This record was funded by a direct-to-fan campaign through PledgeMusic, and it really sounds like a fan centric release. The dust boys offer up 6 classics with 6 new songs, from the trippy and hypnotic but melancholy dance of “Under It All” to a thrillingly different take on their hit “Denial”. While of course there are some songs I would have loved to hear that didn’t make the cut (actually just one- the brilliant “Dead Set” from animosity, which has some of Lajon’s all time best lyrics), this acoustic album is totally satisfying anyway. 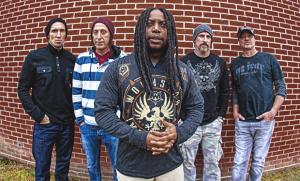 Alt nu metal champs Sevendust, still one of the best live bands out there, are back with a new acoustic release. These guys always shine acoustically as the style really compliments Lajon Witherspoon’s melodic and rich voice. I especially liked opener “Come Down” and a never thought it’d work so well acoustic version of the once live staple “Black”. Seriously, if you can’t appreciate the musicality of these dudes you are pretty stunted. Loosen up, scenesters.

Made possible entirely by fans in a direct-to-fan campaign, Time Travelers & Bonfires is proof of the loyal following the band has earned.

The record can be streamed HERE.

Sevendust just entered Architekt Music studios in Butler, New Jersey with engineer Mike Ferretti to begin recording its ninth album for an early 2013 release. You can check out a one-minute clip from the first day of the recording sessions right here.

Alternative metal giants Sevendust, for reasons out of their control, trimmed eleven days from their European tour. While deeply apologetic to their European, they will be returning to the States for a brief headlining tour with Adelitas Way, Emphatic and Violence To Vegas before heading out on the Rockstar Energy Uproar tour with Avenged Sevenfold, Bullet For My Valentine and Escape The Fate.

Sevendust is touring in support of their eighth studio album “Cold Day Memory”, which was released April 20, 2010 on their own 7Bros. Records, through Warner Music Group’s Independent Label Group. The limited edition CD/DVD debuted #12 on Billboard’s Top 200 chart, marking the highest debut of the band’s 15 year career.