Untimely Demise Denied Entry to US, Tour Ends at Border

Canadian thrash trio Untimely Demise were denied access to the United States earlier this week, only several dates into their three-week tour of the western half of North America.

Having successfully blazed their way through the first five performances in Canada on their way south, Untimely Demise proceeded to the border checkpoint into Washington, and due to a logistical paperwork error involving one member, after multiple attempts, the band were not allowed entry into the country. Frustrated, they turned around and headed home, posting a statement on their Facebook last night explaining the situation in detail and apologizing to their American fans and friends they’d planned on raging with over the next few weeks. In the meantime, the band still have some badass regional gigs confirmed in Saskatchewan and Alberta in May, and will have more to broadcast in the weeks ahead.

Stay tuned for future US live actions once this is all cleared up. Get the full scoop on this unfortunate situation, confirmed Canadian tour dates, and live footage here. 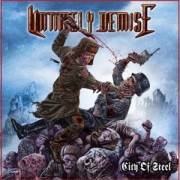