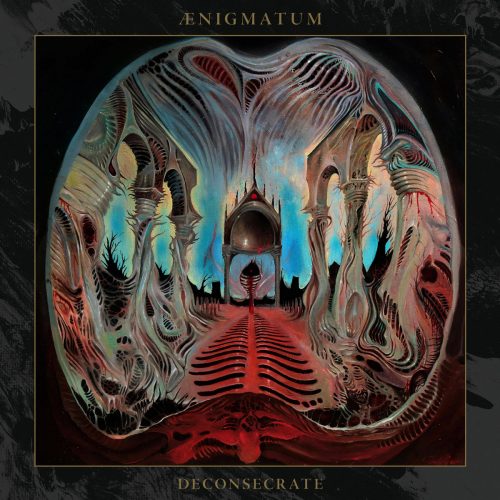 ÆNIGMATUM play incredibly sophisticated death metal that covers many sub-genres yet never feels like a putrescent pastiche, more of a masterful, murderous melding. Deconsecrate, their 2021 release for tastemakers 20 Buck Spin, finds the label completing a bases loaded grand slam they started this year with Ghastly unto Witch Vomit and then Cerebral Rot. Like those aforementioned skull fuckers, ÆNIGMATUM know exactly what styles of death metal they are harvesting and have a deep respect for the genres foundations.

The record opens with “Forged From Bedlam” as jazzy sounding drums that could be Elvin Jones joining Mastodon before things are soon exploding into death metal intensity paired with moving passages of melodic and emotional movements. These latter type of passages are often accentuated by the secret weapon bassist/synth player Brian Rush and one cannot help but wonder how many hours he spent studying Death records like Individual Thought Patterns to perfect the art of perfect accentuation.

Other highlights include the post solo almost thrashy devastation of the 4 minute plus mark of “Undaunted Hereafter” which then drops to half time and really mines the riffing for every drop of blood. Fucking outstanding section which then evolves into the dissonant longing of the “Disenthralled” intro.

This band is simply intimidating in their range and skill level without becoming so tech that it is annoying, somehow keeping things feeling evil and old school influenced but nonetheless displaying the kind of chops that would even make dudes like Archspire or Inanimate Existence probably take notice and give them props.

My only gripe is that in some places the mixes feel uneven or some things are a little too loud or brittle, but overall this shit is pure fire. My favorite is the cinematic, monstrous “Fracturing Proclivity” which really allows Pierce Williams to fucking destroy on the drums and show ungodly levels of talent that will have drum nerds gleefully oozing body fluids over this release.

The Ivory Crux artwork is also super dope, like some sci-fi horror realm comic book nightmare-scape or how the interior of Mars should have looked on Invincible as the parasitic cephalopods’ bedroom.

“Despot Of Amorphic Dominions” is as Lovecraftian a song title as you are ever likely to discover, whether the band meant that or not. Awesome name, though I am now hearing the Beastie Boys say ,”She’s Lovecrafty, She’s Just My Type” and that means it is medicine time. This song will make Gorguts and Grogus fans weep with joy whilst also achieving hallucinatory states of intense prog around 3:40 that Enslaved fans will appreciate.

This band knows how to write super addictive and intricate passages that astound without overwhelming and the repeat listening factor is huge as there is always more to discover, but somehow they still feel like songs and not showboating. Perhaps because the overall emphasis remains on the FEEL of the WHOLE experience rather than the ‘ooh, lookey what I can do’ of each section…ironically allowing them to get away with more insane shit somehow in the process!

Many hails to this band. I can’t imagine how long it took to memorize or chart all this shit! Much respect for sure. Lots of heart and talent. And again… a monstrously impressive new record for fans of old school and technical skill with actual emotional moments as well.