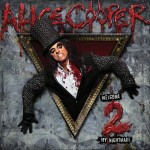 Alice Cooper is a living musical icon. His shocking stage presence earned him more dirty looks than Frank Zappa, his off-stage persona confused those that hated him, and fans have stayed loyal to the Detroit native for nearly a half-century. With time comes change, and does Cooper still have the chops to put out an album worthy of the Hall of Fame adoration, the Golden God lifetime achievement status, and the decades of musical know-how?

How do I say this nicely…

No bones about it, this album starts very poorly and it requires a special message directly to Mr. Cooper:

Please, please, don’t ever, ever, EVER do auto-tune again. Even as a joke, it’s beyond reprehensible. Punch the producer, smack the label exec, do whatever you have to do, but never subject your loyal fanbase to Alicebot9000 ever again. This is how the opening track “I Am Made Of You” starts and it almost sounds like a Weird Al parody.

The whole thing is just an odd mish-mash of semi-thought out material not really strewn together by any consistent narrative. I’m not asking for a concept album, but when someone says “Welcome to My Nightmare” and what they show you is something between a carnival sideshow and hoedown, it’s time to be pinched and woken up from this dream. Few albums push the 14-track mark like this ambitious album does, and this is an example of why most bands stick to the 10-12 range. I understand the glory of the original Welcome To My Nightmare and this album is no Welcome To My Nightmare.

“Disco Bloodbath Boogie” might be the worst song ever recorded. Hearing Grandpa Cooper attempting to rap and say things like “bling” and “grill” just hurts the soul on a level never before dreamt. I truly understand the nightmare portion of this album, as the vocals feel like Micheal Scott from The Office doing a Cooper impression. It’s sad that John 5’s glorious fretwork is buried beneath something difficult to stomach. To have a piped-in crowd clap at the end of your song doesn’t trick me into thinking it was a good song, as the end of “Last Man on Earth,” a Tom Waits-y circus tune, attempts.

The album does feature solid guitar work, as is the norm with Cooper’s tunes. His song structure and production are also highlights, especially when the track is an inspired one. His “original” tracks falter quickly, but those that are obvious nods to classic tunes or genres stand head and shoulders above the rest. A track like “Runaway Train” show his Southern influences, as the bluesy standard gallops its way into a guitar flurry before literally crashing into the next track. The finale “The Underture” is quite well orchestrated (and features no vocals) and “I’ll Bite Your Face Off” feels like a mix of The Stooges and The Rolling Stones, which is pretty awesome.

I don’t know what planet I would have to inhabit to give this album a good review. Wait, I take that back: I’d have to be on the planet that Alice Cooper lives on. This is a planet where Cooper invented rock n’roll, where every musician has been ripping him off since the 60’s and nobody ever pushed the envelope like he did. The only problem is that it’s entirely untrue and for the brief moments of rock that this album possesses, it’s stuffed inside of a bland burrito wrapped with a stale tortilla. Please, for the love of music and humanity’s collective eardrum, give up the ghost and let everyone remember you with “Million Dollar Babies” and “School’s Out,” not this forgettable collection of barely competent tracks.