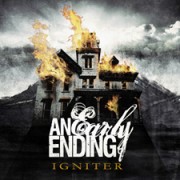 Harrisburg, Pennsylvania’s An Early Ending show some serious growth and determination on their upcoming release, “Igniter.” The band’s sophomore effort, out on CI Records, adds Brandon Vartenisian to the line-up as a guitarist. The collaborative songwriting furiously leans toward a heavier and refined sound, far superior to their previous release. Like the proverbial phoenix, they have came back to life with a new fire and passion for their craft. they also show vast improvement on many levels throughout the entire band.

Click here for the full review.Vocalist Alex Runk gives a performance not unlike frontmen we have seen before, but has come very far in his singing capability. The scream/serenade blend truly works well with his tenor range, along with the layers of harmonies in this chorus-focused album. He’s not all choir boy though. “Powerless Monster” is where Runk belts the verses as if he was succeeding at vocally smashing cinder blocks. His guttural stylings meld well with the heavy riffing and slick licking from Greg Hildebrand and Brandon Vartenisian’s guitars.

Bassist Michael Tarrant lays the sonic blueprint down on “Home(The End)” like a seasoned veteran. He is mixed in quite well, for few notes and runs go unnoticed. Drummer Logan Summey seems to have really focused his energies since the release of 2009’s “Bloodlines.”  I am most impressed with his chops behind the kit. He has effortlessly created a dangerous and decimating foundation for the rest of the crew to do some damage to your sweet, little ears. Listen to “Dead Eyes” and you’ll get it.

Overall, “Igniter” has a lot of familiarity to it, bringing to mind regional influences such as August Burns Red and Like Moths To Flames. Eastern Pennsylvania is very rich in metal bands, but these guys are on their way to standing out in the midst of the mediocre metalcore. As a whole, they have obviously pushed themselves to evolve from “Bloodlines” and they have by leaps and bounds. Now, the task at hand is breaking the metal scene wide open and with their continued dedication, I have no doubt that we will be hearing more and more form this young unit.

“Igniter” wil be released on September 6th on CI Records.