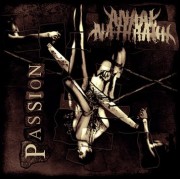 Did you ever know someone that was just flat out, plain ugly? Someone that would never be attractive to you in a 100 years. Though when you ended up spending some time with them, you all of a sudden found yourself noticing qualities and a character that you never dreamed of existing. Ultimately, having your mind blown with what you originally and wrongfully deemed below you. Well, if you are not already familar with Anaal Nathrakh then be prepared for this exact experience and eventual mind blowing that awaits you within “Passion”, the sixth proper full length album from these blissfully chaotic Brits.

The duo of Irrumator (Mick Kenney) and V.I.T.R.I.O.L. (Dave Hunt) have once again crafted an album in “Passion” that is truly it’s own beast, standing apart from comparison to all other bands. Their successful blend of black, industrial, noise and death-grind is nothing less than a scathing, caustic, sonically devastating, apocalyptic soundtrack that not only destroys with it’s vicious attack, but is also disturbingly beautiful in it’s schizophrenic epicness.

Anaal Nathrakh manage to embrace their entire discography with “Passion”, while still moving forward and pushing the boundaries of extreme metal. “Volenti Non Fit Iniuria” starts things out with a slow build up of distorted noise and simple notes to evoke feeling right from the start before launching into a swirling vortex of ferocity from not only Kenney’s brilliant riffs and melodies, but also his drum programming skills. I’m not really big into programmed drums, there are only a handful of bands that either know how and when to use their mechanical/precise sound, or can achieve a natural sound from them. Lucky for us the drum sound is full, and for the most part very real sounding, delivering a scorching beatdown. The vocals of Hunt are phenomenal, he can literally pull off about every style out there and does so in a way that sounds as if he is going to vomit up his soul in a bizarre exorcism rite.

All of the tracks on “Passion” have something going for them, except the album’s last song, “Portrait of the Artist”, which is just un-needed filler to close out the album. The melodies from both Kenney’s guitar and from Hunt’s occasional clean vocals are true winners on the tracks “Drug Fucking Abomination”, “Le Diabolique Est L’ami Du Simple”, and “Paragon Pariah”. Kenney’s compositional skills also shine in the brutal and quick bludgeoning of “Post Traumatic Stress Euphoria” and “Locus of Damnation”, showing that effective songwriting can be achieved in under two minutes. “Tod Huetet Uebel” may just be the album’s highlight, with crushing riffs and fantastic melodies that merge with a seething vocal performance from not only Hunt, but from Bethlehem’s Ranier Landfermann. In fact, Landfermann helps propel this song into stratospheric heights of disturbed extremity, that truly brought a smile to this metalhead’s face.

Mick Kenney’s beefy production really highlights the material on “Passion”. Without a proper production this kind of album would simply fail. The ear needed to blend and balance the maelstrom of this magnitude is key to the success of the final product, and thankfully Kenney’s ear works magnificently. The aural masochism that is Anaal Nathrakh, and the duo behind it, have created a stellar extreme metal album that will definitely be on many a top ten list at the end of the year.

I thought about giving this album a perfect score, thinking that there might be no way for A.N. to actually top this album. Then I remembered that I don’t like to eat my own words, and that when these guys release another album, that is what would most likely be the thing to happen…highly recommended.