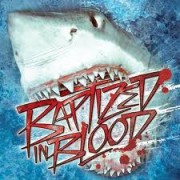 Canadian Metallers Baptized In Blood have released there self titled album “Baptized in Blood” on Roadrunner Records and it is a great metal release. I say “metal” release, because by placing this album in a genre, I would be defeating myself. This album is just a straight up, hard backed, metal extravaganza. If Pantera, Arch Enemy and Three Inches of Blood had a child that grew up listening to hardcore, it would start a band and release an album that sounded exactly like this album. Featuring songs written about self empowerment and real life experiences this band breaks from the typical metal cliches of writing about cold frozen wastelands or zombies dismembering people before having sex with the body. Featuring epic guitar solos and expertly played drum parts this album is also a great technical metal album without being too wacky for the average ear. It incorporates many of the elements of power metal guitar riffs, Pantera-esque vocals and technical grindy drums that are so appealing in various different genres. I really enjoyed it from start to finish, and I think you will as well. Check it out!