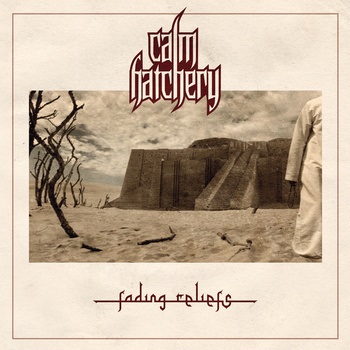 Think thrash Sepultura meets bouts of technical lead wizardry and relentless charge. Orphaned Land at least make you feel sad but resolute and hopeful when touching on some of these subjects, whereas Calm Hatchery just make you feel like human folly is ceaseless. Looking at the mid term elections in the USA and how easy we are conned to be ping ponged in the “two party” system which is in fact just basically one party of corrupt and bought officials these days, you kind of start to really feel futile. Thankfully, this music is so angry that is will also keep the fire churning in your gut and make you want to keep looking for justice. Even the title Fading Reliefs suggests wisdom, like cracked edifices and reliefs, is being forgotten and we must remember to find true “relief”.

If the mid tempo barrage, chug and spectral layers of “In The Midst Of Nothingness” don’t get to you, chances are you don’t like death metal.

“Illusory World” is a psycho workout of lighting fast tech death with a very gruff attack and razorblade tremelo. There is a bitter but almost spiritual feeling to the intensity of the metal here, a sense of pure determination despite dissapointments in life. The leads, especially on “Illusory World” and “Blessing Of Mantra” are liquid fire unleashed. The chanting and groove intro to amazing single “Blessing Of Mantra” makes you feel pride in being a devoted death metal fan until you have to bang your brain against your skull when the verse starts. Many bands try to look intense or write about dark shit to seem like bad news, but Calm Hatchery make you deeply feel it in your shoulders. It’s up to you if you square them or slouch in defeat, but either way the war rages on.