Album Review: Carach Angren – “This Is No Fairy Tale” 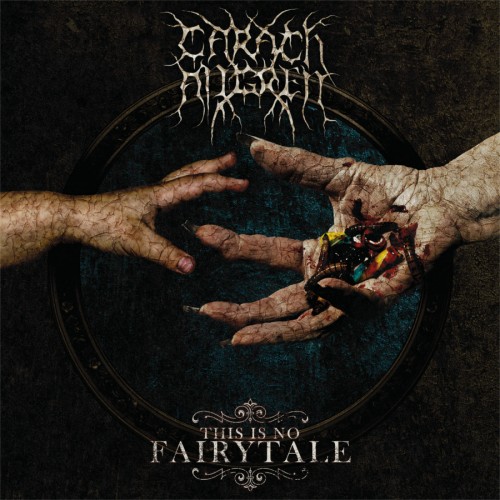 Carach Angren‘s This Is No Fairy Tale is a frightful blend of horror and metal with symphonic elements akin to a Tim Burton score. These hell-forged songs are at times vertigo inducing as well as insane. Definitely a niche band but fans of Septicflesh on a much more horror bent will thrill to it. This is a blackened and death infused updated version of Hansel and Gretel that has heroin abuse and domestic violence (“There’s No Place Like Home”) and a much sicker tone or darker flare than the recent silly, if fun, action movie “Witch Hunters” (give me Monica Bellucci in The Brothers Grimm instead any day).

Anyhow, the Netherlands based band are very tight and complete professionals here, though at times it is usually less about the song than how it feels in relation to the whole story piece. Still, there are way worse things. Many bands can’t come close to the skill of Carach Angren in heavy metal and they obviously don’t give a fuck what anyone thinks. Horns to them for their full embrace of over the edge, dark creativity to shed light on the horrors of the ill nature of deranged psychosis out there. Sickening candy addiction is a metaphor for perhaps shallow culture, the material working on many levels of the psyche. We are lonely in a forest and hunger for blood, convenience or even a deeper, damaged sense of family are all examined.

“When Crows Tick On Windows” builds the anxiety with a cool, spooky song name and great, stacatto string arrangement beforea and then beneath a mind blowing initial blast from the band before more growls come in. The story gets darker and darker, told in just discernible screams. When (Spoiler) their mother dies the music gets really emotional and the cries of loss are actually pretty affective and disturbing. This band is really linear in vocal approach in that it is an ongoing story but fans of King Diamond’s way of unwinding a concept in mini chapters will have no problem jumping in, albeit with death vocals. The musical style is less accesible, more akin to some of the weirder stuff on King’s Abigail 2: The Revenge meets Abigail Williams at a late night showing of Sweeney Todd than more linear leads and thrash influences ala King’s Them album for example. I don’t even know why I’m comparing the two other than the horror storytelling elements, just to illustrate the contrast better.

“Dreaming of a Nightmare in Eden” is like watching a play, as ominous whispers and Danny Elfman strings high on crack and satan are gnawing at the edges of your mind like evil fucking mice. The only real critique of this album is sometimes the strings are really friggin’ loud and the growls are even louder, though I suppose that’s the optial approach in basically a death metal musical. “Possessed by a Craft of Witchery” is probably the most balls out track, just super evil with rad banshee backing textures that give goosebumps. The song slams and jumps around brilliantly. Elsewhere some material blends together, but overall this dark tale of abuse may turn your stomach but is absolutely worth ingesting.