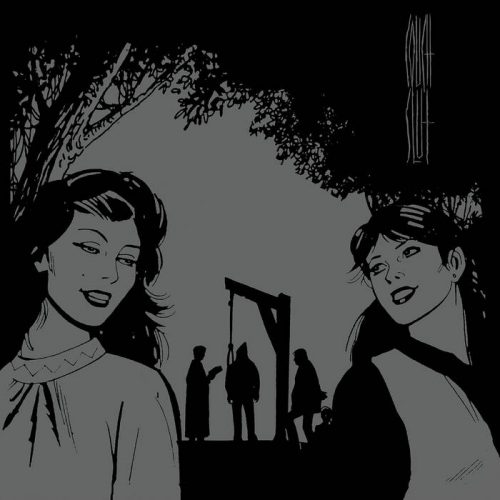 The band get weirder on this record, combining the most extreme side of post hardcore with some adept melodic intricacy embedded in the riffs. Think more Pulling Teeth or UOA than, say, Thursday when I say melodic. “Funeral Dyke” opens with some skronky noise, like walking into an awkward situation, turns into a barrage and then the song explodes midway into some melodic black metal that False or slower Aosoth fans might enjoy before returning to stomp city.

At times mournful, confrontational, aggressive, determined and hopeless, Contempt celebrates influences while playing with a sense of freedom at times forgotten these days. As such, it comes off a major win not just performance-wise, but in -intentionally or not- repudiating the contempt in society at large these days, where cross-pollination of ideas is discouraged over hate rhetoric. I could’ve used another faster track on here as well, but it’s by no means critical.

I used to think seven songs was the max you could use for calling something an EP before you had to think about calling it an LP. This feels like a full album whatever you call it. You don’t get fatigued listening as much as the pushy “Penalty Scar” is rocking but also emotionally taxing. You get both charged up and feel a sort of physically ambitious fury. The bass really growls on this one, btw. But yeah, that’s just three songs in.

“Snake In The Grass” has a certain “You Fail Me” Converge massiveness to it that could make it a strong set closer, though it also turns into almost beautiful post-metal in some pretty thrilling parts that make me feel like Hum and Oathbreaker had a NYC baby that grew up fast on the streets. The pocket groove and bold ring out at the end reminds me a lot of Hum and Shiner, just excellent use of huge dynamics and space through execution of a simple but rad idea.

“Summer Smiles” opens with some rattling drums akin to Shellac, Zeni Geva or Today Is The Day’s more patient and tone setting yet quite violent exercises. The shredded throat story telling vocal on this one from Megan Osztrosits is a thrilling performance and really sounds disturbed, even as she is in control of the performance as a skilled screamer. This has some of the best dirge meets grime riffing, drums and emotional unrest I have heard since Battle Of Mice.

“Folk Song” opens with some riffs that sound like complete sanity destroying annihilation, the band really stretching here to make music you could piss into the fictional volcano of Mt. Doom listening to before diving in. It seems like it would be an even better live closer than “Snake In The Grass” because it will smash you flat and there is not much left after that besides blood pancakes (also a concept I warned my ex’s daughter about so she would always look both ways crossing the street when she was little, honestly).

But somehow things do go on. Longer songs are all the rage these days in the underground and Couch Slut drop a 9 minute plus monster in “Won’t Come”, which sounds like Unsane slowed to a heroin kick induced crawl in a filthy basement somewhere. It feels like an unflinching stare at hitting some kind of bottom. I wonder what it is actually about. The vocals sound distant and like a pleading, impassioned argument more than a traditional rock style. Everyone’s performances are excellent and you sort of are pulled along hypnotically into a vortex. There’s also brief and excellent melodic vocals.

It can’t be said the band copied their first record and if anything they have shown they have some staying power, the ability to startle consistently and are invested in writing killer songs over style points.

You can hear the full record now over at the WFMU archives HERE or on Bandcamp.