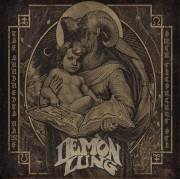 There does not seem to be a whole lot to say about The Hundredth Name. Slated under the genre of Doom Metal, it always seems to bring just enough groove to be inclusive to a broader metal fan base. With this in mind, as a Doom Metal album, it doesn’t stand out. As a matter of fact, instead of dragging its listener down to the depths of a bog and drowning them, The Hundredth Name seem to be more interested in just kind of jamming. Where I live, we have a saying about things being as slow as molasses in winter time, and when it comes to Doom Metal that’s what I expect, and this just does not carry that quality.

The Hundredth Name is not all a bad album, there is something hypnotic about Shanda’s vocals that makes me want to like the album more than I do. But all together the instrumentalists just don’t stand out to me and in the end, all the songs end up sounding kind of the same.

If you’re a fan of Demon Lung, this album is worth at least a preliminary listen, if you’re a Doom Metal fan with a couple of extra bucks and a curious bone, this album may even be for you, but overall, I wouldn’t recommend it.