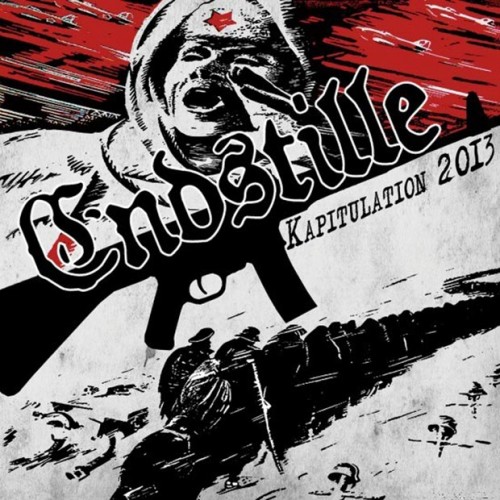 Endstille return with more patented German war-themed black metal ferocity. Kapitulation 2013 is one of the band’s best executed and darkest records yet, a grim portrayal of unflinching war. You can practically feel winter’s cold bearing down on soldiers as they place one foot towards another marching toward’s death. The band are often accused of Nazi sympathy because they sing about German history but they have distanced themselves from such pathetic allegiance. This is about humanity’s folly and the ugly truths of history. From the “Blasphemer” Sodom cover to the ripping ‘Sick Heil” or the vertiginous “Stalin Note”, this is both top notch metal and nauseatingly powerful when you think of what it is about.

This is perhaps my favorite war metal album of 2013, though the newest from Panzerchrist might have taken the cake if they hadn’t biased me by never returning my email questions for another publication (but no hard feelings). But yeah, Endstille kill it on here. My only complaint is that, like Turisas2013, I am not really a fan of year dates in album titles (except for Public Enemy’s Apocalypse ’91: the Enemy Strikes Black. PE it is still cool when Chuck D says “1989, a number! Another summer…” on “Fight The Power”. With metal or, the worst, emo bands singing about summer in the late 90’s or  early 00’s, it isn’t as cool). But, to get back on track…Black metal or war metal fans alike need to check this out. It is completely engrossing. “Reich an Jugend” will give you chills of the power of propaganda, while “The Refined Nation” is like a careening punk-infused black metal train off course and bearing down on you. L. Wachtfels perhaps delivers a career performance on “Nostalgia”.

If you can’t handle harsh BM with an oppressive examination of history, go back to your Five Finger Donkey Punch and steer clear. Otherwise, this will fucking grab hold of you and not let go, like a dying hand at your throat.