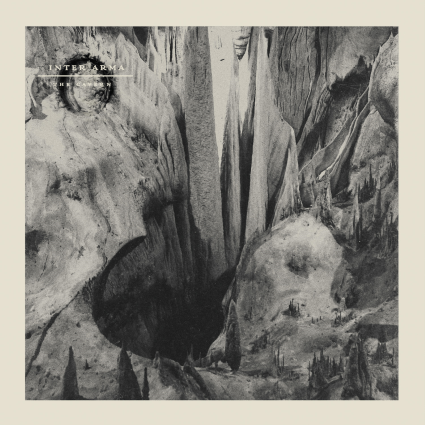 The Cavern from Inter Arma is one of those large scale, post-Dopesmoker massive tracks  that more ambitious artsy metal leaning types sometimes aim to compose these days. USX’s haunting and determined The Valley Path is my favorite ambitious one track long player of recent years, though Lesbian’s tripped out Forestelevision also comes to mind as a good one (except for the ridiculously silly the first time and annoying the next fake King Diamond part in the middle). Long story short, a lot of doomy bands seem to be making one “big statement” type song the last few years, but they have usually been worth indulging.

Inter Arma are hot on the heels of Sky Burial with this 40+ minute epic bump on the head. A pretty somber descent into the depths of sludge, brawny unified dark rock riffs and the new trend of Americana referencing black metal, the record nonetheless is more solid than scattershot. The performances feel more in tandem to the larger whole than haphazard, a slow and patient allowing of yourself down into the maw of this cavern with occasionally rapid and terrifying plunges.

Opening with an ominous ambient noise like the parting of the veil, we step into the Cavern hovering in the space between fear and exhilaration. A smoky guitar line not unlike the aforementioned USX guides us into the start of the track with dreamy ease, forgetful that at any moment this band can drop the doom hammer. And they surely do. Token Inter Arma thump arrives in fairly short order, a mutual push/pull between restrained tempo and the power of the sound. This actually seems more focused than Sky Burial, which I really enjoyed but felt wasn’t as good as the blowjob acclaim it was getting (feel the same way about Deafheaven, though I like them  a lot as well).

It comes down to how much you like any of the styles on display here. The recording is good. The music moving. It isn’t revolutionary but will affect you. A lot of these ideas have been done before by peers or earlier bands, but Inter Arma excel in their willingness to sell/”own” the idea of the mood with every ounce they can muster. When the 8 minute mark death crawl section hits in, your skin will feel like little ants holding sand paper are trying to get out from the inside. It’s a Neurosis worthy dirge that growls with actual menace before it opens into a more cosmic, space soaked version of the thudding main refrain.

The middle section of the track is kind of like Inter Arma felt the need to prove they can get as flashy as the best Red/Blue Baroness-stuff in a similar vein of intricate guitar shimmer and climb, retaining the Relapse rough hewn proggy sound that Baroness and Mastodon left behind in their production values as their fan bases grew. 26 minutes in after a barrage of falling debris and riffs shooting all over the place we get a lonely coda of drawn out ambient desert guitar and post-rock. You can’t help but feel this Cavern might be the Cave of Satan itself and you are looking at both the beauty and horrors of the Id simultaneously, forced to face your lights and shadows.

The song goes through many more movements and is a real piece of art, just not exactly startling anymore. I don’t mean that as a criticism, as I would flip to see them pull this off live and it must have been hell to arrange. The best thing about The Cavern is that it really lets you feel like part of the band in the immediacy and overwhelming size of it all (that’s what she/he said). By the time the 45 minutes are nearing an end, however, you are very rocked but also quite exhausted as you climb back out. You’ve learned some things and also tested your limits, breathe labored, knees and legs bleeding  and callouses forming on your hands/mind, but all in all the trip was worth it until the next challenge in life. The howling wind seems to scour it all away and set the slate back to the starting phase by the finish, but your bones know what you’ve been through.