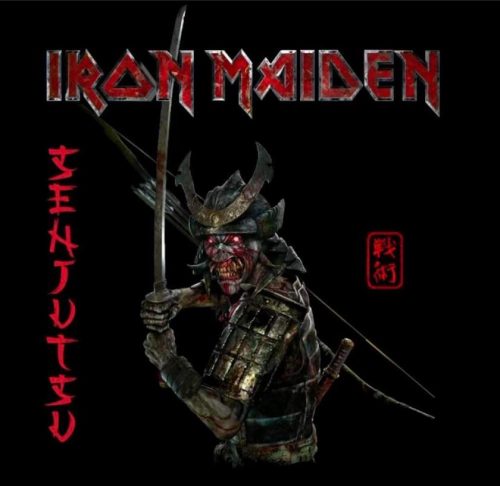 And now the question must be asked…Is Eddie the biggest cultural appropriator in metal or a galaxy-wide undead magic ambassador? Seriously, we have had Egyptian Eddie, Book Of Souls Eddie, Yautja look-a-like space alien Eddie, Indian headdress Eddie and now Samurai Eddie? Relax, dude. You’re like the Lana Del Rey of metal mascots at this point. It is feeling slightly cringe.

Anyway, here comes the real review…in a time of horrible compressed five second attention span Spotify-advert ready “music” being shoved commercially into our minds and reprogramming us to forget what any non soda commercial production sounds like, it feels counterintuitive to critique an institution of heavy metal intergrity like the legendary Iron Maiden. But being a rock writer and respecting the genre history also means you have to get your hands dirty sometimes.

Senjutsu, the 17th studio album, will give you a general Iron Maiden feel and elicit a certain nostalgia. It also certainly has highlights and if you love the band you can’t help but root for them and feel a huge sense of gratitude and warmth that lends a more charitable view to the records shortcomings. But let’s get down to brass tacks. If you play the new Iron Maiden album back to back with Blaze Bayley’s “War Within Me” or “The Dream of Alan Turing” there is no question that the Blaze solo album blows it out of the water for passionate performances and a much higher energy level. Blaze also simply sounds WAY stronger than Dickinson vocally now, who has sounded winded often on the last few Maiden releases. Blaze also did a Samurai thing first, so I hear.

As much as I love Bruce and he is iconic, and as much as he hasn’t gotten as bad as some of Axl’s worst having an off night on stage reed thin dry falsetto parrot sounds or  the outright gerbil swallowing, marbles and beer foam gargling internet melting trainwrecks in the case of Vince Neil, there are times even on studio tracks when Bruce sounds like he is struggling. He actually sounds better live sometimes than on the albums, IMO.

“The Writing On The Wall” was a great choice for a single, an exciting even if slower track that sounds like more classic era Maiden met with some spaghetti western adventure. It was a thrill to hear the single and gave me a lot of hope for the record. Unfortunately the album doesn’t curtail the bloat that hurt The Book Of Souls and The Final Frontier. Maiden have always been their own worst editors. I guess it is hard when you are used to huge and epic songs and have a very enabling fandom. And I love Maiden and this review already sounds way harsher than intended, so let me clarify.

As latter day metal elder Statesman, I understand that Dickinson and company might be holding it down and emphasizing long form poetic lyrical stories that stretch over vast track times. The problem is this makes for great read along with the booklet story time moments more than an invitation for repeat listening  unless the music is also as in synch with the story such as on the pretty decent “When The Wild Wind Blows” from The Final Frontier. When it works as a formula, it is still epic. When it doesn’t, shit gets super meandering. And it doesn’t help that Bruce these days needs more multi-tracking to beef up the vocals and the delivery lacks as much energy often and is more anemic.

They just can’t deliver the same punch as their younger and higher energy days as often, which is not their fault. The problem is they don’t trim fat or play to their current strengths enough.  “Lost In A Lost World” literally sounds like a bunch of cool yet wholly random and vaguely cheery at times Maiden riffs sort of glued together (though it does have an outro section after a pretty rockin’ solo that mixes the dynamics up and is one of the most thrilling moments on the album). It is a shame the song feels kind of disjointed because the intro of the song is an introspective, weary traveler type section that has some of the most powerful appeals to the bittersweet nature of our human condition on an album of juggled themes. But all in all it aint “Stranger In A Strange Land” (which the Brave New World album title already set a precedent for referencing, it seems) and this new song shares titles with a Moody Blues song that is pretty well loved.

4:31 of “The Time Machine” almost is a Rage Against The Machine riff, so there are some twists and turns. Ultimately the record suffers though from too much mid tempo similarity that doesn’t really crest. Track two, “Stratego” feels like it just sort of ends because it doesn’t know what else to do. While guitar solos are a highlight and the keyboards as well, the solos vary between lighting an emotional spark and feeling like a space filler, it hurts to say.

“Days Of Future Past” kicks off with some punch and swagger that reminded me of “The Eye” by King Diamond before the best riff of the album precedes Bruce’s arguably strongest performance and fullest voiced takes on the record. I kept being distracted though as an X-Men nerd comparing the lyrics to the story or movie version and also wondering why Bruce didn’t just write a song about the Silver Samurai fighting Eddie, lol. “Death Of The Celts” feels the most “important” as far as the lyrics and music having the most resonant connective tissue and the slow and moody intro is absolutely fantastic, one of the band’s best arrangements in years and a song which will absolutely entrance audiences if they play it live to a packed house.

All in all, while I am happy it is here and some of the themes and musical passages are quite cool (including a hard rock section of “The Parchment” that musically reminded me of a less interesting than “Zombie Eaters” by Faith No More), it doesn’t wind me up half as much as I hoped it would.