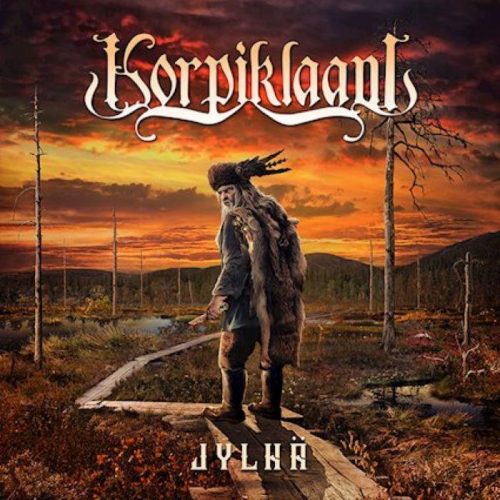 Korpiklaani – Jylhä
Review by Ralka Skjerseth
Release date: February 5th, 2021
Label: Nuclear Blast Records
Folklore, nature, and celebration have always been some of the prominent themes in Korpiklaani’s songwriting  – and on this one eleventh album of theirs, they featured those themes too. Jylhä has a magnificent resonance packed in a form of 13 tracks, released under Nuclear Blast records (of Sabaton, Enslaved, Immortal fame). Apart from featuring the themes of folklore and nature on this album, they also featured three murder stories. One of them includes the Lake Bodom murders which happens to be one of the most well-known homicide cases in Finnish criminal history that is still unsolved. The lyrics were powerfully written by the renowned poet and author Tuomas Keskimäki who is also Korpiklaani’s long-time lyricist. He managed to engrave words into enthralling tales that possess their own complexities. The release of Jylhä also marks the very first feature of the new drummer Samuli Mikkonen on a full-length album, replacing Matti Johansson.
This album is very diverse in terms of genre classification; Korpiklaani incorporated elements of thrash metal, power metal, reggae, ska, and even a bit of punk on this album aside from their folk metal roots. The instrumentation also comes in a wide range, featuring various kinds of ethnic instruments that are beautifully presented such as accordions, mandolins, and fiddles. The generous amount of rhythmic fiddles featured on this album strengthens the folkish element that gives vibrant colors to this album.
This album opens with anthemic drums and catchy eclectic riffs that are presented on “Verikoira”. And then we also have a tune that is strong on power metal elements, which is “Niemi”. “Leväluhta” meticulously combines reggae with folk metal and opens with such fast paces. “Mylly” is a folkloric tune that is powerfully written, telling the story of a working man’s journey to the mill. “Tuuleton” is one of the tracks on this album with slower paces and it sounds tremendously poignant at first, but manages to become more powerful and resurgent in the end. Next up we have “Sanaton maa” which is an easy-listening classic folk metal tune. Then there is “Kiuru” which is a song that tells the story of Finland’s unresolved homicide case. “Miero” opens with a riff with progressive tendencies, almost Sabbathian to an extent – then Järvelä proceeds to sing peaceful slow paced vocals. It is also an existential song under the subject of the cosmos. “Pohja” gradually progresses from a ferocious intro into an exuberant set of riffs. “Huolettomat” is a fun poika anthem that also presents intricate bass lines and immense energy with its layered arrangements. “Anolan aukeat” presents a solo using accordion and it’s unusually intriguing. The instrumentation of “Pidot” is obviously danceable and it’s what makes the track festive. The last track “Juuret” has harmonious choruses that become a perfect closing to this album.

The themes of this album are quite diverse, as it speaks of a wide range of topics ranging from folklore to murder to the universe and our own roles in it. It may sound festive but it also has its own darker side. I should say this album would remind its listeners of the likes of Turisas and Eluveitie. This is the perfect kind album to drunk-dance to, especially if Finnish folktales and festivities are your kind of thing. 4/5