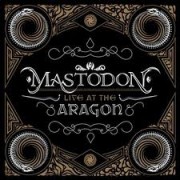 A band is only as good as its live performance, plain and simple. All the time spent in the studio making your album sound immaculate means little if your concerts don’t set you apart from your peers. Fortunately, Mastodon is one of those bands that put as much effort, if not more, into their live show. Their latest release, “Live At The Aragon”, was recorded from their show on October 17, 2009 at the Aragon Ballroom in Chicago during their tour in support of “Crack The Skye”. It not only captures the brilliance of their latest studio release, but the aural essence of a Mastodon show.

Get a description of that aural essence here.

“Crack The Skye” is a true concept album, and Mastodon treated it as such on their tour in support of it. Their show consisted of playing the album in its entirety, followed with an encore full of fan favorites and an occasional cover song mixed in as well. Mastodon exhibits an audio and visual experience unlike any other, bringing their songs to life in a way that can never be duplicated on a CD. They take us on a journey that begins with the majesty of “Crack The Skye”, guiding us through the astral trip of “Divinations”, to the multiple layers of “The Czar”, to the epic mastery of “The Last Baron.” The journey continues with recent favorites (“Circle Of Cysquatch,” “Aqua Dementia”) and old favorites (“Where Strides The Behemoth,” “Mother Puncher”) and concludes with a cover of the Melvins song “The Bit.” It’s hard to top the original, but this version is very close and compliments their set perfectly. Even though the recording of this show was by no means perfect – the vocals could’ve been slightly higher yet the recording does a disservice to no one.

I was fortunate enough to see Mastodon three times on the “Crack The Skye “tour, and was blown away each time. If you’ve never had the pleasure of seeing Mastodon live, I highly recommend not only getting the audio version of “Live At The Aragon”, rather the DVD deluxe edition. You not only get to see the show in its entirety, but it also includes the movie that played in the background during their shows, which is an acid trip of visual beauty that mesmerizes and tantalizes. Do yourself a favor, invite some friends over, grab a beverage of choice, put on “Live At The Aragon”, and have yourselves one hell of a night.