Album Review: Nachtmystium – The World We Left Behind 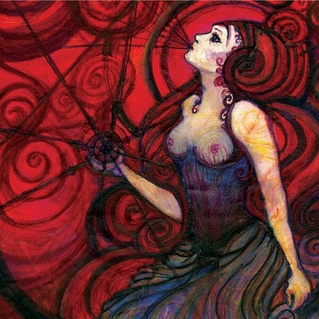 Nachtmystium‘s The World We Left Behind is going to fly over people’s heads, but not for lack of scrutiny on their parts. I could make a bad joke and say it will fly over heads because the guy who wrote it was really fuckin’ high a lot, but…it’s truly because it can’t be properly accessed in a context of snark or outcry at the “Blake Judd” controversies surrounding the record. The addict struggling to be clean, in the true throes of a bottoming out, is in a desperate vertiginous hell. It is like being underwater and being (to name drop a great Albany, Ny band) Surrounded By Teeth.

The essence of the looming pressure to make a final Nachtmystium record was very real. The outcry over Blake’s handling of money from the public as well as angry former band mates (who say they will never work with him again) was a very palpable thing. It’s interesting that Jeff Wilson’s Wolvhammer have made the killer black metal album, Clawing Into Black Sun, that many people wish had been The World We Left Behind. I did the first interview on this record awhile before the arrest scandal broke, for Metal Riot.

Judd was in great spirits then…about getting his life on track and working with the musicians who he had found to be in TWWLB-era line up. I also spoke extensively with Blake during the cold winter while this album was coming together.My own life was falling apart at this time and a lengthy relationship. Blake and I ended up deeply discussing addiction , stress and and personal goals in our lives, friends we missed and other cool matters from trivial to deadly serious.

I believe he was being genuine during that time.

He also played me some of the material in infancy and it was intense to finally hear the mixes the public got. I for one am glad that Blake chose to keep some of the lyrics that are more vulnerable and under fire from some of the other metal media review sites as being a grab to switch the narrative. They should probably listen to “Tear You Down” from the point of view of the drug destroying someone. That song is a masterpiece. And really fucking scary. It makes me vividly remember old demons and want to throw up violently.

I am a real fan of this band’s music regardless of the social context, though those things color other opinions of mine.

But is the music good? Inherently?

“Fireheart” is my favorite song…fierce resolve and Chicago industrial/dances history married to minimal black metal instinct of the underground. The title track is experi-metal keys and torrid sounds “diving into hell” before a BM explosion with Bathory-eque back up “ahhhhhs”. “Voyager” opens with one of the most mercurial and dopamine level careening as Blake describes the endless maze and lust and corridors that draw him to follow black metal’s flame. The end of that song is deep guitar wirship and meditation of the highest order, before one of metal’s best riffs in recent memory hammers down like marching feet, nails digging into concrete and plunging needles. You also ought to try imagining the record in instrumental form first before hearing the lyrics and THEN absorbing the social contexts surrounding it. That simple one, two, three excercise will put the record in a whole other light that critics have perhaps overlooked. “In The Absence Of Existence” is near perfect. “On The Other Side” is noise rock and almost a Cure Staring At The Sea bassline that is explosive as it enters a dream of synth, scorching guitar (with even a hard rock solo) and a true desire to be “alive as me”. Then there is almost a half time hardcore beat that would fit on an H20 record. I fucking love it.

The World We Left Behind is a great album, one of 2014’s very best. It is stark and choking in bile and anguish, flames of guilt and poisonous purging. It is a binge on smog skies and halos of flies. It’s rotten meat falling from limbs as you stump fuck a krokodil addict compulsively. It’s lies and truths and a final song, “Epitaph For A Dying Star” which even fans of Pink Floyd or Eluveitie could agree on in terms of the epic feeling evoked. Spite and hope and honesty. It’s a handshake and a slap. Self love and deep self loathing. Communication breakdown, it’s always the same. Bloody red hands and heroin hellfire.

He seems to really be trying to get his life back and “Can’t believe I did this”.

Do you believe or are you suspending disbelief?

The announcement has already been made that the band will continue despite a previous intent to disbanded. It reminds me of Ministry calling several records from The Last Sucker on their last, before death took their guitarist  Mike Scaccia and made it all too real. Is that what is going to happen here? Is it vulgar to speculate, a cheap black metal dead pool any fan of this band has been forced to fucking play?

Is the future of Nachtmystium going to be the same as the cloudy, turbulent and contrary past or is Judd “never going back” and “free”?  The outcome remains to be seen.