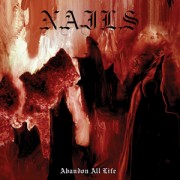 “Lesser men want control. They’ll never have what I hold.”

Nails return with a true vengeance, following up the acclaimed and super grim UNSILENT DEATH with an even more intense record (maybe the meanest album of 2013 yet). “God’s Cold Hands” is everything that makes Nails so raw, an explosion of message, intent and purpose. The Kurt Ballou tracked record melds crust, hardcore and sludge so well it will crush the (few) haters who think they are a hype band.

The bass on this record really brings a level of punch and body to the songs, each tune rattling in your chest. Some riffs in life, regardless of genre, just seize the throat and don’t let go (think ‘Priests Of Sodom’ by Cannibal Corpse, ‘When All Is Said And Done’ by Napalm Death or ‘Red Tide Rising’ by Orange Goblin). This album is full of such memorable moments where you find yourself staring at the radio or whatever music playing device and not believing the awesomeness of the sounds.

“Wide Open Wound’ shows the band killing it at a slower pace, while ‘Cry Wolf’ is brevity that kills in the best way. They really…no pun intended…NAILED tempo control on this LP. And the lyrics are also direct and right to the point. “Hate won’t hide these wounds. No coming back from your abuse”

Nails are a valuable entity in the heavy music world, a reminder of what the underground is about and a violent denouncement of vapid efforts. If you want a serious meditation on constructive yet full fury filled rage release, grab this fucking now. Near indecipherable yet deep lyrics (like label-mates The Secret), gnashing teeth adrenaline levels and sick art by Farron Kerzner just make this so much more than vibe. Great work, boys.