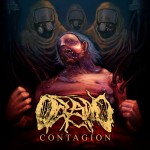 Chicago Grindcore Titans Oceano are set to release their second album, “Contagion” November 9th on Earache Records. “Contagion” packs a solid punch, as any listener will notice upon hearing the first few tracks of the album. Tracks like “Viral Re-animation” and “Quarantine” will leave you bloody and wanting more.

“Contagion” breaks from Oceano’s 2009 album “Depths” through the use of slower choruses, acoustic intros and generally more Grindcore craziness with a little less of a Death Metal touch. The vocal harmonies reminiscent of Despised Icon are a huge improvement over “Depths” and the many breakdowns will leave any listener in awe.

Although packed with hard hitting well written songs, the single “Weaponized” is a stand out hit of the album. That said, each song stands it’s own, and has unique elements which make a solid album from start to finish.  Artfully mixed and mastered, this album is a great listen and totally worth checking out. 3 out of 5 stars.

Check out the video for “Weaponized” Here.