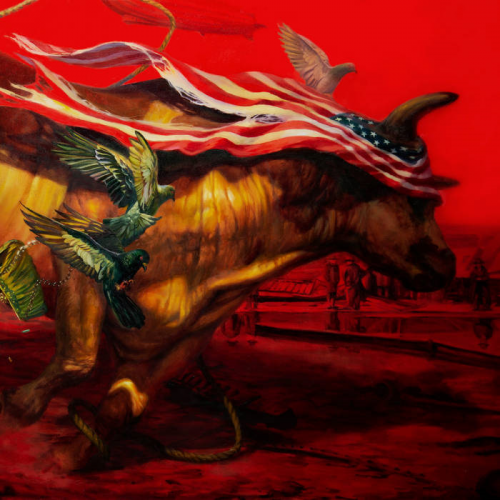 Today is a huge day for prog/metal/screamo fans as Protest The Hero release what may one day prove to be their crown jewel, Palimpsest. Moved up a day to honor Juneteenth, the record is simply awesome (but there is little “simple” about it). First off, the Derya Nagle production on this record is the best the band has ever sounded. No shade on their other excellent albums but this is the best balance of a mix I have ever heard for this complicated act (“Gardenias” is a barreling rollercoaster that a less deft hand could have quickly derailed with a less sophisticated ear). The songwriting is also next level, even for a band known for mind boggling and death defying arrangements.

This album features the showmanship paired with connective tissue heartfelt and relatable lyrics meets extreme concepts the band is known for, but much of this album is firmly rooted in current problems in society more than ever before. Themes of real populism versus the fool’s gold peddled by Trump to his wrestling mark cult are peppered throughout this record. Art like this more prominent in the public discourse would actually make us great again. Rody Walker singing ,“I’m dreaming of a life I can’t afford” on the all-killer “All Hands” is relatable to almost anyone.

Elsewhere “The Fireside” lampoons people who take for granted their privilege over an exhausting (in a good way) series of musical gymnastics and school essay length lyrics that would make “Masters of War” seem like cliff notes.  “I’ve got a job for every able-bodied man/Munition factories for women and children/And all we needed was a reason/And you gave us one, gave us one,” calls to mind Eugene Jarecki’s Why We Fight military industrial complex skewering documentary from the early 00’s and makes me wonder why we STILL haven’t invested more in sustainable energy jobs for common folks instead of still jacking off weapons manufacturers and supplying them with endless worker ants. “Mountainside” and “Hillside” break things up as beautiful interludes that sort of stir a patriotic longing for a non-nationalistic blindfold, eyes open to see this country for warts and all rather than false idol worship.

“The Canary” is a triumph of a single and within the scheme of the album itself. The flow and style recalls their earliest Kezia days manic and earnest, poetic decrees paired with their maturity and widened world lens.

“I was named after my grandmothers in the tradition of my family/I was born after my stillborn sister
Romantic idealistic lies euphemize as fantasy /But the water always bursts first from the blister.”

Breathtaking. It is more important than ever to actually sing about meaningful shit and not just murdering women or other stupid things in metal. Our world is crying out.