Album Review: Serpent of Gnosis – ‘As I Drink From The Infinite Well Of Inebriation’ 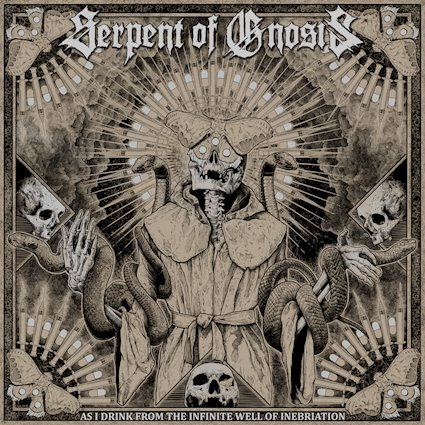 It was pretty fun to learn about the Serpent Of Gnosis release from 1126 records literally the day before it drops like a megaton piano on the heads of the world. The last minute “Oh shit, how did I miss this” of it all was a nice way to head into the weekend. I had no idea Johnny Davy had a sickeningly heavy new band at all and thought he had like vanished into Area 51 or something awhile ago. How cool to hear that completely unhinged roar again!

Serpent Of Gnosis’ debut As I Drink From The Infinite Well Of Inebriation is one of the heaviest records you are likely to hear anytime soon, managing to be next level technical while still having emotional impact AND the heavy vibes of a lot of modern dethcore. Dudes are not fucking around. The album title also reminds me of the myth where Thor drank from a mead horn that was like connected to the seas and actually lowered the sea level, if I recall. Iconic, lol.

“Fragile Vessel Of Serenity” and some other tracks also feature some weird creepy ambient type moments that will freak you out like a horror movie and add to the unsettling onslaught very effectively. I am super stoked on this album. Darren Cesca on drums is a whirlwind throughout, elevating and blurring the tech deth parts into deadly grind territory quite often. “The Colorless Capsules” is one of the most punishing tracks, a masterful wrestling match of extreme subgenres that all dance around the death metal totem pole. Dying Fetus or even old Whitechapel fans could co-exist raving about this thing but there are also a few brilliant little progressive guitar moments that sneak in and out between extreme pit starters (“Harvest” has the best example of this and is maybe the best tune on the record, just fucking unreal).

“Cognitivity” has a thunderous slow intro that almost sounds like old Burn the Priest for a minute and adds some superb mosh value to a record that most often goes for Zoom vs. The Flash levels of speed. “A Mask of Lucidity” also mixes it up and has a very tasty lightning solo section and some darkly melodic bridge action that was pleasantly unexpected and cool. The band don’t overstay their welcome on any track, as the songs are all relatively short but kick your ass across the pavement and allow for you to get very invested in the record. A lot of people are gonna flip shit on how solid this release is, I am telling you now. You definitely want more (including a black eye and a T-shirt), by the time this bad boy is through.