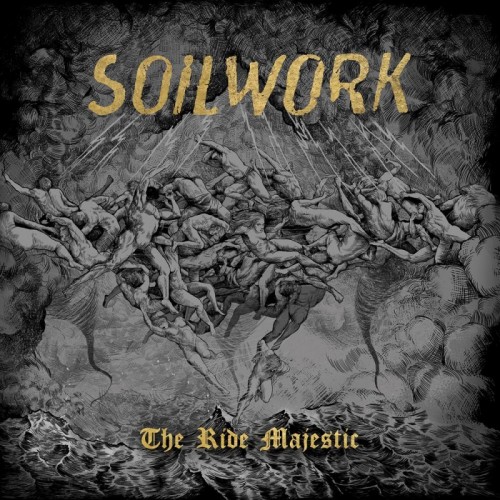 While their early stuff is very hard hitting and awesome, the band’s live tenure and their distinctive openness to pulling from many metal influences to create one of the more unique styles in metal since early Fear Factory has resulted in several near-unclassifiable classics. I’ll never forget how inspirng it was at Ozzfest one year to hear “Nerve” blast from the mainstage speakers between Mudvayne and I think friggin’ Maiden (if that was the correct year). And seeing Soilwork (who dominated the stage) along with Darkane, Strapping Young Lad and Fear Factory live as a package tour was so cool years ago and evidence that Fear Factory were always cooler about often sticking with more extreme bands as openers and exposing their American fans to some amazing bands from around the world. It felt like metal was really pulling from all corners to survive and cross pollinate. Growth like that is good, even if we don’t have to be the smurf village and give up misanthropic tendencies completely we can still show the world that metal is a force to be reckoned with and a better community than many would peg us metal folk to be.

The Ride Majestic is more evidence the Soilwork well doesn’t run dry. Always some of the most acrobatic but punchy and not cheesedick technical playing merged with pure conviction in Speed’s vocals. His screams and blend of highs and a totally unselfconscious dedication to more dramatic passages make “Petrichor By Sulphur” (for just one example) a song that this band could throw down on any stage with any other metal band and have a more than fair chance of holding their own. heck, they are always a hard act to follow! One of my favorite memories I mention at times is doing a job of tree removal with Fred Waring, the former drummer of Crisis. Fred had subwoofers fucking installed in his Bucket Dozer and blasted Soilwork and SYL. It was awesome.

Grab this for a really full experiece with many twists and turns, slippery leads, mandatory defiant/drum-centric tracks, melodic passages that will stick with you but deserve to- and screams to hold up against the best of Pantera. I wish Soilwork would cover “Cemetary Gates” sometime, as a matter of fact, just to prove once and for all that Pantera should’ve never worried about it being to mellow. Heck, Tyr covered it and that was rad enough and pretty recent. Tangent.

“Alight In The Aftermath” is one of the heaviest Soilwork offerings in years, near black metal intensity and chord choices, yet before long deliciously bold choices take the song many different places. Yet Soilwork go there, really put the travelling in. It’s not just jumping al over the place to showboat, but passage after passage of real songwriting. By fitting closer “Father And Son Watching The World Go Down”, you’ve taken a thrill ride with the band that is at times exhausting yet fuels you for the next mountain to conquer.