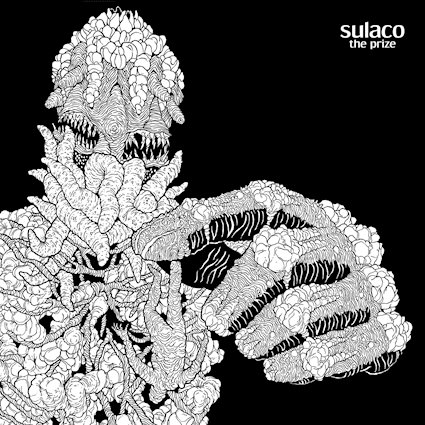 Rochester’s Sulaco have always kind of been underdogs, weathering the underground storms but never quite breaking huge yet always mattering and doing cool shit. Since the early 00’s the group has kept up blazing a trail with their unique blend of extreme metal sub genres, melding hardcore, grind and weird ass rhythmic shifts that Gorguts fans could enjoy into a fresh and kind of minimal style with maximum punch. Plus, my best friend and I smoked weed with them years ago at a Woodstock Tat Fest behind a Harley place and always thought they were cool after that, haha. The band also have ties to Nuclear Assault and Brutal Truth, among others. They just keep it real and stay relevant after most bands give it up, and that deserves lifer points.

The Prize will be released on August 17, 2018 with Translation Loss Records on compact disc, digital download, and two vinyl variants (white and the limited edition “Clear with Heavy Black and White Splatter” which is limited to 100 copies). The trippy cover art by J.R. Schulmerich is worth the purchase alone.

There is a lot of blurring drum roll madness (10/10 performance from Chris Golding, fuck dude), whirlwind guitar chug and tortured vocal styles on here, particularly powerful on “The Road”. The song marches forward then explodes into drama as much as any Cormac McCarthy post-apoc book, though I don’t know if they are related. There are some moments on here of borderline proggy-tech death as well and the band just sound incredibly precise and deadly. They are one of those bands who, like Gigan or Today Is The Day, have somehow managed to capture their vibrant and over the top live essence on a lot of their recordings. I am thrilled they are still at it. Mixed by Neil Kernon (Judas Priest, Nile, Cannibal Corpse), the new record has a furious and raw but tempered feel. It is not a polished turd, that is for sure. You feel every scream in your center like a branding iron.

When Matt Tuck from Bullet For My Valentine said metal has gotten ‘a bit stale’ recently, he prob hadn’t heard this beast.

Erik Burke and company should be proud. They have nothing to prove and if this makes a lot of money or otherwise the “prize” includes a well deserved place upon the wall of glory in the halls of respected extreme metal acts on Valhalla. Go fucking check out the anxiety inducing first intense song “Disguise” here and for God’s sakes pre order this shit for a measly $6.99 and don’t be a stick in the mud!