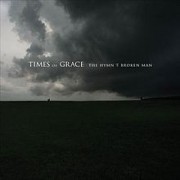 Foremost and first, we are dealing with two immensely talented musicians. The level of intelligence these two operate on is beyond any way of measuring and I fully acknowledge the artistry and musicianship involved in creating a work such as this. That being said, this is an unexciting album at best. As the title suggests, these songs were written from the comforts of a hospital while Adam recovered from an emergency surgery procedure on his back. What better to do than mope about hurting and healing?

I must admit, Jesse’s vocals have gone in quite a different direction since his departure form Killswitch in 2002. In those days, Leach was a straight forward, brutal scream monger, with a few glints of clean. Now, it seems he has donned the more marketable hat of the full of sorrow crooner. Adam has his moments in the vocal rounds, mostly in the backing. Those familiar with the latest offerings from Killswitch can easily pick up on his stylings.

Musically, I find this indiscernible from the current flavor and style of Killswitch Engage. It would be just as appropriate if this was another KsE album. I find the sound done and done again. I do give them all the talent and ability credit in the world, but this seems so unoriginal for two musicians of their caliber. The structure of many of the songs are very jagged and craggy, making the listening process awkward and irregular, hindering further exploration.

I can’t say I would recommend this to many. It just doesn’t hold the qualities of the hype that is was preceded with. Again, Both Adam and Jesse are immensely talented musicians. This just wasn’t the best exhibition of their skills. It was more like showing off and letting down.