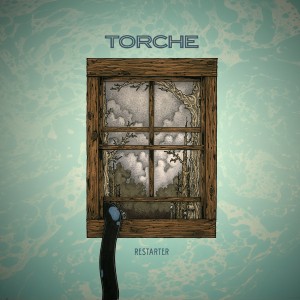 “Annihilation Affair” opens things up in an avant garde manner, hammering drums and bossy riff dissembling within a few minutes to antisocial feedback plus vocals disinterested if you follow along or not. Totally ballsy way to open the record, especially considering how track 2 “Bishop In Arms” is even less accesible in some ways. Despite melodic vocals and a rumbling train drum beat the song has this cool kind of shimmering high end interplay between the vocals and some of the guitar work. It is almost like a really cool movement or sketch that sets up a kind of fleeting mood or the faster part of sex when you’re really excited before you realize you gotta slow it down a little and not blow your wad too soon. And that’s when “Minions” kicks in with low end pay off and the massive slower riffs Torche is heralded for. Steve Brooks beckons to scene minions and the band have their moment in full.

Torche did an extra great job on this record of traversing different frequencies of high and low while still retaining trademarks. There’s not a bad song in the bunch. It really is an “album”, Ill reiterate. By track 4’s “Loose Men” they are really warmed up and have gotten into the fun of this and past the initial “we don’t care what you think” kiss off of the Melvins-y “Annihilation Affair”. “Loose Men” is straightforward, has dueling Thin Lizzy moments over a smart beat and the hookiest vocals on the record. Then they get back into the crushing with the super meaty power of “Undone”, a song made to bring on some shove your neighbor moshing. It’s one of their heavier numbers and a real workman-like rager. This album is officially the shit.

Second half of the record we get down to more business with the pretty conventional for Torche “Blasted”, which might have faired well on Harmonicraft. “No Servants” gets back to the “fuck you” approach with ear piercing feedback that will make dogs bark topped with measured vocal delivery before a brief, bright riff that could be Swervedriver beckons in the driving verse. The chorus is goosebump inducing sludge pop grandeur. Despite underground classics, this is probably their finest hour if they are gonna break on through to the other side.

Purchase the new album from the following locations: