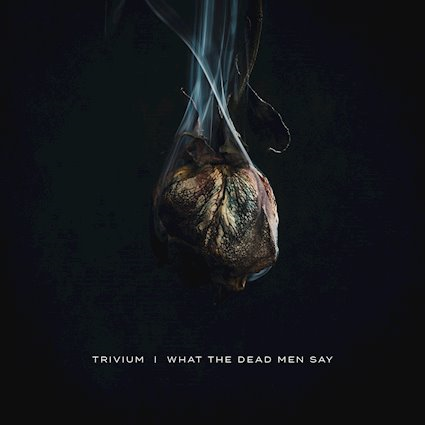 What The Dead Men Say is a well named album for the ninth release from heavy metal modern champions Trivium. Sadly as there are mass graves around the world right now there are probably many dead with things left unsaid in this mortal plane. This new record from one of the hardest working bands in the business cements their legacy and proves once and for all they are a long term force in the genre who broke well above many of their one time peers from the pack of bands they emerged with. It is full of tight performances, a love of big moments and insane musicianship and packs a lot of punch along with the emotions.

My favorite recent record from the band remains the Michael Baskette produced and easy to connect with Heaven & Hell influenced Silence In The Snow, though I like the Josh Wilbur crisp production on this even better. Wilbur produced the recent The Sin & The Sentence record as well (which feels like it just came out to my time blurring together mind), but on What The Dead Men Say you really feel the pairing clicking more than ever between Wilbur and the band. Songs like the relentless and brilliant “Catastrophist” or the instrumental and cinematic Annihilator meets Death Magnetic sized Metallica – opener “IX” burst forth with complete confidence and go to work on you fast.

“I looked up what the word ‘Catastrophist’ means, and it’s one geological view of how the world has been shaped by very catastrophic and immediate changes,” says Paolo Gregoletto. “You can apply the same narrative to the C.E.O. of an oil company making decisions for profit, but ruining wildlife. You know it’s going to be a disaster, but you do it anyway. When you’re born, you have no say in the world you grow up in. You do as you get older though.”

“Bending The Arc To Fear” could give Arch Enemy a run for their money with a fierce melodeth intro before a big verse opens up into catchier terrain.

The balance between screams, hooks and borderline hokey but still rad big rock moments is very well done, with a very healthy amount of savagery left intact for the mosher metalcore and heavy metal kids out front. Listening to this record legit makes you proud of how far Heafy and pals have come. The press release reveals the genesis of “The Defiant” can be traced back to “streaming in a Hungary dressing room trailer at a festival.” They are always incorporating their journey into the work and holding their own against the trends. It has earned the band a lot of respect over the years and a place in the halls of metal forever. No fan can hear the glistening solo of “Sickness Unto You” and not feel some force in their chest call them to higher purpose, even as the song revels in anger at the parts of us left dead by the world. But the album never gives in.

“I’d love for people to be inspired to pick up an instrument and write a song,” Heafy says. “The reason I love metal is it goes against the grain. The best way to overcome darkness is to make something creative. Whether the impact is small or large, I hope it’s positive for listeners. We hopefully built a community to make them feel safe where they can talk about what they want, enjoy it, and get help if they need it. It’s possible to even find a lot of love and light in there.”

While their are still some older and bigger bands around, Trivium are well poised to be the leaders of the pack for the next generation as time marches on. “The Ones We Leave Behind” uplifts with soaring melodic riff moments and tribal into speed obsessed drums paired with inspiring and hoarse sung vocals, giving the feeling the band does it for the fans as much as themselves. It’s another big win all around.