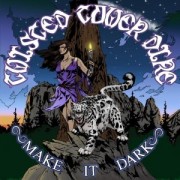 You have to hand it to Twisted Tower Dire: They chose a name that makes little sense, they play a style of metal that hasn’t been popular since people thought Rob Halford was straight, and their original lead singer died in a motorcycle accident last year. Even with all of this accounted for, they have still managed to stay true to their version of metal on their new album Make It Dark, the same version that grew out of the seeds Judas Priest and Iron Maiden planted 30+ years ago. But is there room for this antiquated style of fantasy music these days, or does the powerful musicianship of these Metalheads make up for their genre of choice?

Read the full review to find out!

The answer is a definite “no.”

Dragonforce showed that the ridiculous vocals mean nothing unless you have a monster like Herman Li shredding his ass off behind the glam, and 3 Inches of Blood showed that you can still be Judas Preist-ly if you take the vocals one step further and go off the charts with your voice. But to simply recreate the music that inspired you is not nearly enough, and apologies to the hard working dudes in this band, but none of the guitarists hold a candle to KK Downing or Steve Harris, the drummer isn’t Scott Travis or Manowar’s Scott Columbus, and Viper’s Jonny Aune (their new singer) has some chops, but not enough to make new fans for this band.

It pains me to see talented bands parody themselves by sticking to rigid traditions within their favored genres, and while a standout track like “The Stone” shows how blistering this group can be, the majority of the album does not show that, as most of the music takes a step back to Aune’s vocals. If you need your fix of nostalgia and can’t afford the $50 to see Maiden or Priest, then check out Tiwsted Tower Dire when they come to your town. Nobody plays this style of metal anymore, so if enough power Metalheads support them, then maybe they can grow from here, but after 16 years of making music that was perfected and buried a decade prior, the future looks dark.