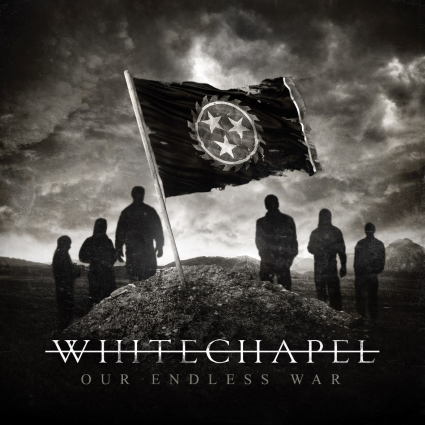 Whitechapel are back with album number five, Our Endless War.

The album opens with a kind of generic instrumental 1:21 build up that you might expect from As I Lay Dying or any number of bands, but as soon as the title track kicks in with downtuned glory, this motherfucker is on. The title track deals with America going down the tubes, “sweet land of idiocracy” and invites us to “take back our justice for all”. It is refreshing to hear this kind of metal not mentioning killing women or whatever for a song. The band have definitely grown and this is their most realized and exciting work since the bleak as heck This Is Exile (2008), when they really started to break out. The newest record combines more solid songwriting with their early brutality for a true synthesis of Whitechapel madness. This band, like them or not, are here to stay and really represent the new metal generation for tons of kids.

Whitechapel have inspired rabid fandom since the beggining, with some of the most dedicated followers in extreme metal. Check out Phil Bozeman’s recent job on the Mitch Lucker Memorial DVD  on “Unanswered” to see dude’s ability to really connect to an audience (plus he gets points for repping a Kylesa shirt). Phil is a solid frontman and the band really care about metal. There is a reason Suicide Silence and Whitechapel blow away other “deathcore” bands in sales, and thankfully they are the most talented of the bunch. That said, the vocals on this album are louder than anything else, so much so that at times they nearly drown out the band. The plus side is you can understand the growled lyrics more than some previous releases, but there are many times you just wish the music could breathe more. Kind of a weird mix.

I just wathced the Kathleen Hanna documentary The Punk Singer on the riot grrrl heroine’s cultural impact and role fronting Bikini Kill to reclaim punk from sexism. I wish there was more of that energy in the current rock scene (punk, metal or otherwise), though it is nice to see so many women in metal lately. I get realy sick of all the “kill ex girlfriend bitches” type songs, though hopefully female fans can translate those kind of lyrics in death metal to reflect upon people who have screwed THEM over, regardless of gender. Whitechapel have a very violent image and are named after the area where Jack the Ripper killed many prostitutes. I’m not ever expecting them to break the mold, but at least they are making people connect to heavy music culture.

I interviewed the Whitechapel guys once for AMP and we had some funny conversations, admittedly including the eternal hotness of Heather Graham.Still,”Mono” is brutal and dark as heck with the message of “stop whining for a better life, just kill yourself, your kids and your wife.” The final refrain is “No one cares. Kill yourself.” That is a bitter brew! I guess that and “Let Me Burn”‘s opening bellow of “The Mouth of Hell is open wide tonight” are kind of there to just make people think “aww shit” and want to mosh, but what are we fighting for here? Then again, the “no one cares” lyric is pretty good motivation to realize that you should follow your dreams in life and not conform to the white picket fence BS we get shoved down our throats. Who are you trying to impress? Sink or swim time.

“Fall of the Hypocrites” is a bonus track that should have maybe opened the actual album, as it starts off with a really pulse pounding sense of menace, but I guess it is just as good tacked on the end (and sounding rather like some of their earlier material). “The Saw Is The Law” features some manic vocal machine gun death scatting from Phil Bozeman set to an apocalyptic barrage. The “chorus” riff is groove metal that has been heard a million times, but it nonetheless works and doesn’t detract, setting up the high speed bridge/solo attack. I can see windmills erupting up the ass for this number. Other highlights include “Let Me Burn” with some old Morbid Angel style death groovery around the 2 minute mark.”Worship The Digital Age” beckoning dystopia with a slow, monster intro riff that is nightmarish, while “Blacked Out” is a whirlwind of tech-death unity that ends up devolving into a  clangy, hard charging blood barrage. “Diggs Road” opens with a welcome, murky and disorienting guitar piece that wouldn’t be out of place on a Watain album, until deathcore takes charge again. This song is probably the best on the album, with great performances from the whole band and a message that you have to go down in flames sometimes for what you believe in. Definitely the most depressing and yet also most deeply emotional track. More of this, please. “Even if you’re in hell I’ll go down in flames just to see your faces again”. Cool stuff. Though I guess it does seem to also advocate suicide at one point, hahaha. I guess I am just more of a fan of motivational, Hatebreed-type lyrics these days.

While this is perhaps the best Whitechapel album so far, I still think they have a better one in them. A good effort though from one of the torch bearers of the modern scene.