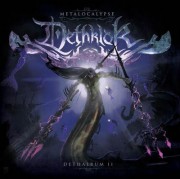 With the second release from virtual band Dethklok on Williams Street Records, they  have deepened their thunderous sound and have strayed from the somewhat satyrical sound of the first “Dethalbum”. Brutally carving their own niche into the death metal world,  Dethklok show they are tremendously talented musicians from first to final track.

For those of you who don’t know, Dethklok is a fictional band from [adult swim]’s show Metalocalypse. They are the greatest and most successful band in history, known for ridiculously expensive and extravagant live shows that always end in massive damage to the surrounding lands and grotesque fan mutilation and fatalities. They are the world’s third largest economy and concert hosting cities’ and countries’ local economics flourish when they are in town. The inverse is also true. When Dethklok is between albums, stocks fall, businesses close, and politicians and presidents commit suicide. Dethklok is that important. That being said, this release ended the massive economic drought and fan attacks on freight trucks supposedly shipping the album.

This release is a complex symphony of hexi-kicks, sweep picks, and lucid lung lamentations. Drums thunder harder and deeper, solos and riffs rip into your ears and Nathan Explosion’s vocals have gotten away from the common murk and mire of death metal, transforming into a well-enuciated yet dark and deathly voice. A certain maturity and experience has honed and hardened the Dethklok sound. Technicality and tenacity run rampant through the recording, showing how the band has evolved into a well-oiled spinning death machine.

The rhythm chord progressions are irregular, but retain their harmonies and accent melodies perfectly in “Black Fire Upon Us” and “Symmetry” show off the immersion and depth the band is capable of, trudging through the sludge and then ascending through the highest platforms of sound. “Bloodlines,” “Volcano,” and “Comet Song” blast you through tribal and super-natural soundscapes, while “Laser Cannon Death Sentence,” “The Gears,” and “Dethsupport” pummel and punish, fueled heavily by relentless drum attacks. The only lackluster songs on the disc are “The Cyborg Slayers” and “Murmaider II: The Water God.” The latter is a sequel to an awesome song from the first “Dethalbum,” but this time around seems like a rehashing of riffs and ideas from the original recording. Kind of like “The Unforgiven” and “The Unforgiven II.” The composition of “The Cyborg Slayers” seems forced, uneven, and more like a hard rock or glam metal song.

My iPod constantly finds its way back to this disc on a regular basis. It never fails to entertain, enrich, and, most importantly, make me want to practice my guitar. The musicianship in this band is unsurpassable and the quality of the production and engineering is tip-top. I never miss a note, hi-hat, or backing scream. This is for any fan of metal, for all can find something to take away from Dethklok’s approach to death metal.