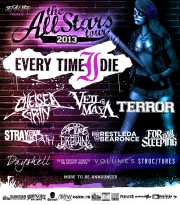 The All Stars Tour is coming back for the third year in a row! Though no dates have been released, the line-up has been announced, check it out:

Every Time I Die

Stray From The Path

For All Those Sleeping

With more bands to be announced.

Every Time I Die Vocalist Keith Buckley had this to say of the tour:

“We’ve always put a lot of effort into making this band work and when we perform we do so at the highest level of intensity, so to finally be deemed an ‘AllStar’ is a dream come true. I plan on relaxing in a hot tub with Wade Boggs or smoking huge cigars with Ronnie Harmon talking about our visits to Hollywood. Those are just some casual things us AllStars do when we’re not giving 110%. But that’s rare. This tour has a solid line-up and we’re excited to be a part of it. See you all this summer.”

More News On Every Time I Die:

More On: Punk, Tour, Every Time I Die, Epitaph
share on: