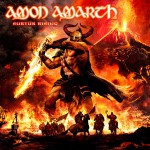 As an unofficial kick off to its release, Amon Amarth will make a live appearance on the long anticipated 70,000 Tons Of Metal cruise, scheduled to take place from January 24th – 28th. The voyage will begin in Miami, Florida, make its way to Cozumel, Mexico and play host to 40 bands including Voivod, Sodom, Iced Earth, Fear Factory, and Obituary.