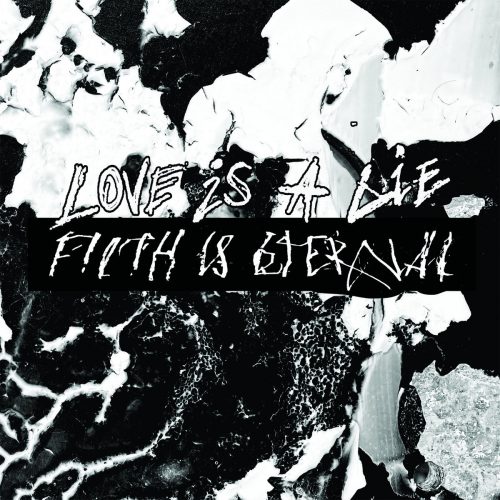 The gnarliest punk album of the year just dropped. Love Is A Lie, Filth Is Eternal from Filth Is Eternal (formerly F’d and B’d) reminds us that there was a time when Seattle bands were considered dangerous, when Mudhoney might jump on your face and half the roster of Sub Pop didn’t look like even Starbucks wasn’t gentrified enough for their tepid, pale faced indie rock bullshit. Filth Is Eternal plays an explosive blend of go for the throat, not a moment wasted punk n’ roll married to Sonic Youth flirting dissonance and with tones ugly enough to make Fudge Tunnel blush and The Bronx seem like Captain & Tennille. Fronted by an actual snarling wild animal over some of the best riffs and beats you have ever heard.

This record reminds me of a show I played in 1997 with my old band Fuse where I got wasted on unclean tapline Rolling Rocks and bottom shelf whiskey after getting a tattoo and ended up rolling on a country bar floor half nude and bleeding and smearing black grime and tattoo inky residue and blood everywhere, waking up the next day feeling kind of aroused and ready to fight literally anything but also half dead. Sirhan Sirhan is gonna get out of jail and be all stoked to enter polite society and this shit will play and it will retrigger a hypnotic trance and make dude go all Winter Soldier on some dudes.

If your band doesn’t bang as hard as the ending of “The Dog”, just quit now.

More On: Punk, Band Spotlight, Filth Is Eternal,
share on: