Battlecross to play Brazil with KSE 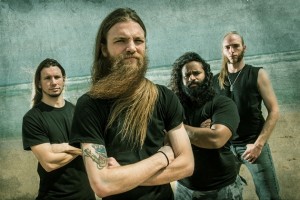 American thrash titans, BATTLECROSS, are pleased to confirm three tour dates this August in Brazil with Killswitch Engage and Memphis May Fire. This will mark the band’s first-ever shows in South America.

Comments guitarist Tony Asta: “BATTLECROSS is primed and ready to explore the unknown and take on South America with the mighty Killswitch Engage and Memphis May Fire! This will be our first time ever performing in this part of the world where a strong legacy of thrash metal has created a culture of the most devoted metal heads in the planet. We’ve been keeping in touch with fans through the BATTLECROSSBrazil Facebook page and we can’t wait to show them what we’ve got!”

BATTLECROSS took their energetic live show for the first time ever to Europe earlier this year supporting Killswitch Engage and Trivium. The band will return to Europe in June for a series of festival dates, including Download, Graspop and co-headlining dates with Huntress. BATTLECROSS will also play a series of US shows (also with Killswitch Engage and Trivium) next month.

BATTLECROSS‘ latest album, War of Will, debuted at #134 on the Billboard Top 200 chart, #118 on the Top Current Albums chart, #2 on the Heatseeker chart, #15 on the Current Hard Music chart, #16 on the Hard Music Overall chart, and #32 on the Independent Albums chart. The band also debuted on Canada’s Soundscan charts coming in at #178 Top 200 Current and #25 Hard Music Charts while also landing on the iTunes charts for release date at #103 Top 200, #10 on Rock, and #2 on Metal! This marks the band’s first ever Billboard chart debut! War Of Will also peaked at #3 on the US iTunes metal chart on the day of release.