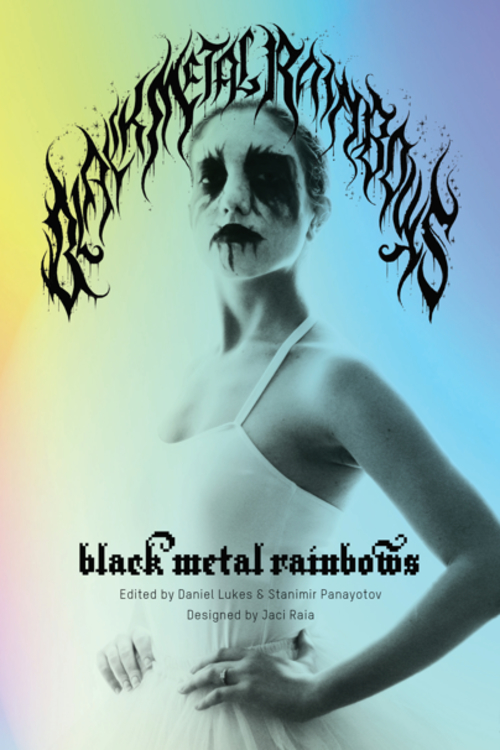 Taking a break from listening to TrueAnon Podcast roast the crap out of Elon Husk to tell you about some inspiring black metal news for your Pride and mine! Big Kickstarter launch today for a project that includes many people whom I admire and love, Black Metal Rainbows! Kickstarter launch for this project is HERE.

I can already hear D666 fans calling us pooftahs for posting this!

Black Metal Rainbows is a 400-page, full-color anthology of radical, queer, and leftist writings and artworks that uncover black metal as a genre of openness and inclusivity.

Black metal is a paradox. A noisy underground metal genre brimming with violence and virulence, it has captured the world’s imagination for its harsh yet flamboyant style and infamous history involving arson, blasphemy, and murder. Today black metal is nothing less than a cultural battleground between those who claim it for nationalist and racist ends, and those who say: Nazi black metal fvck off!

Black Metal Rainbows is a radical new vision of black metal – a book like no other: a unique collection of stunning artworks and thought-provoking writings by a wide range of 80+ writers, artists, activists and visionaries, including Drew Daniel of Matmos/The Soft Pink Truth, Kim Kelly, Hunter Hunt-Hendrix of Liturgy, Margaret Killjoy of Feminazgul, Laina Dawes of What Are You Doing Here? A Black Woman’s Life and Liberation in Heavy Metal, Espi Kvlt, Charles Forsman of The End of the Fucking World, Eugene S. Robinson of Oxbow, Svein Egil Hatlevik of Fleurety and Zweizz, an oral history of Dødheimsgard‘s album 666 International, a Tridroid Records label profile, and much more. 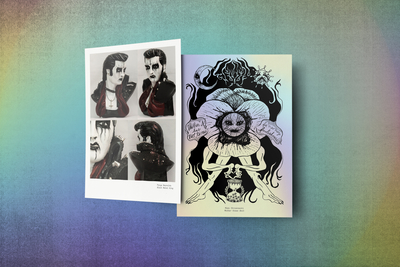 Across essays and interviews, artworks and comics, this gorgeously-designed full-color book foregrounds black metal’s evolution and celebrates its long-term anti-authoritarian spirit. Black metal Rainbows is a necessary conversation-starter, a destroyer of gates and gatekeepers. Because beyond the clichés of grimness and hate, lies a musical genre rich in creativity, humor, and all the colors of the rainbow. We see black metal as open, inclusive, and unlimited: a musical genre whose vital spirit of total antagonism rebels against the forces of political conservatism. All hail the golden age of pluralistic black metal!

From the crypt to the cloud, Black Metal Rainbows unearths black metal’s sparkling core and illuminates its prismatic spectrum: deep within the black, far beyond grimness, and over a darkly glittering rainbow. Nothing is trve, and everyone is permitted. Long live black metal’s trve rainbow!

“Black Metal Rainbows? But of course! Behold a treatise of the unholiest order. These pages unravel the densely layered alchemy that is black metal, and its undeniable relationship to the rebellious queer spirit we as a community so desperately need to resurrect. Rainbow hails to all involved for digging deep and unearthing a fabulous piece of f^ggot witchery. May the seance begin!” —Paul Masvidal, Cynic

“Despite being there in the moment during the ascent of the Venoms, the Bathorys, and the Hellhammers, I’ve tended to fidget warily from afar since black metal partly curdled into a mess of homogenized inhumanity. So, I welcome this collective liberating howl beyond the stereotypes of icy forests and puerile hatred. Bravo!” —Barney Greenway, Napalm Death

“Black metal is a fascinating genre—in part because of its complicated (and bloody) history but also because of the rigorous theory and deep thoughts buzzing around it. If you were to put together a perfect black metal book, one that captures that essential complexity while also providing historical and personal insights, it would be Black Metal Rainbows, a sprawling collection of essays, interviews, band and label profiles, and all kinds of art for both the true kvlt and the curious. It sets the new standard for how we should think about this music.” —Brandon Stosuy, The Creative Independent

“Black metal is the ultimate outsider musical genre, so it makes sense that us queers and weirdos would build a home within its barren fields. Black Metal Rainbows is a necessary anthology documenting the strong anti-oppressive backbone being woven into black metal’s very fabric.” —KW Campol, Vile Creature

“Usually discussions related to black metal devolve into a mad-libs sameness: throw together “grim,” “obscure,” and a glancing reference to (anything) polar-adjacent, and somehow a complicated product of diverse personalities, locations, and influences are presumed to be adequately described and defined. When any field of creative activity is skeletonized down to a brief sketch or caricature, all the contradictions and the mess of human endeavor are leached out of the discussion, and the sameness and monolithic quality of our broader culture that black metal was deployed to resist, ultimately creeps its way back in. Black Metal Rainbows tries to re-center the conversation back into the messiness and contradictory impulses that make black metal a touch point for so many independent/disparate artists, writers, and others.” —Banks Violette

“Somewhere in the distance, I can hear the keyboard warriors blubbering: ‘Mom, the pool’s dirty!’ But mom is too busy listening to Myrkur and slamming Mai Tais at the gay bar. Besides, she knows what the rest of us know: Black metal’s white bread phase is over. Black Metal Rainbows is all the colors of the dark.” —J. Bennett

“Groups that prize authority and enforce homogeneity are inherently vulnerable to dull extremism; a fascistic, fetishistic process as easily observed in such factions of black metal as in any church a banal black metal might burn. Of course the idea that art should belong only to one privileged class of people is as plunged in hubris as the idea of owning god. In shattering the flatly ludicrous and ludicrously flat illusion of black metal as some immutable orthodox mirror for white/western/cis/hetero/abled/male supremacists, Black Metal Rainbows is a milestone that we, as participants in disturbing said illusion and enthusiasts of punching upward in all its forms, can only celebrate.” —Gazelle Amber Valentine, Jucifer